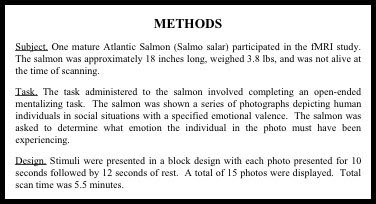 "Neuroscientist Craig Bennett purchased a whole Atlantic salmon, took it to a lab at Dartmouth, and put it into an fMRI machine used to study the brain. The beautiful fish was to be the lab's test object as they worked out some new methods.

"So, as the fish sat in the scanner, they showed it 'a series of photographs depicting human individuals in social situations.' To maintain the rigor of the protocol (and perhaps because it was hilarious), the salmon, just like a human test subject, 'was asked to determine what emotion the individual in the photo must have been experiencing.'

"The salmon, as Bennett's poster on the test dryly notes, 'was not alive at the time of scanning.'..."

The salmon's brain, if you take the fMRI scan's results at face value, was thinking about the emotional state expressed by human faces.

No, Bennett is not trying to add dead fish to the list of "intelligent and self-aware beings" oppressed by humans. (June 25, 2008)

"...'By complete, random chance, we found some voxels that were significant that just happened to be in the fish’s brain,' Bennett said. 'And if I were a ridiculous researcher, I'd say, "A dead salmon perceiving humans can tell their emotional state."'

"The result is completely nuts — but that's actually exactly the point. Bennett, who is now a post-doc at the University of California, Santa Barbara, and his adviser, George Wolford, wrote up the work as a warning about the dangers of false positives in fMRI data. They wanted to call attention to ways the field could improve its statistical methods...." [emphasis mine]

The article explains what a "voxel" is. It also says that "Bennett's paper has been turned down by several publications." Can't say that I blame them: Who'd want to admit that accepted fMRI interpretation methods can show cognitive activity in a dead fish?

I rather hope that the imaging industry catches on, and uses the right statistical tools to analyze fMRI scans. It's a useful technology - but if you're not careful, it'll show that a dead fish is thinking about you.

That was my head hitting the keyboard when I nearly passed out laughing.

"The salmon was not alive at the time of scanning." HAHAHAHAHAHAHA!