(ESO/M. Kornmesser, via BBC News, used w/o permission)
"An impression of what the sky might look like from the exoplanet Gliese 667Cd, looking towards the parent star and featuring, at top, the other super-Earths in the habitable zone"

"Scientists have identified three new planets around a star they already suspected of hosting a trio of worlds.

"It means this relatively nearby star, Gliese 667C, now has three so-called super-Earths orbiting in its 'habitable zone'.

"This is the region where temperatures ought to allow for the possibility of liquid water, although no-one can say for sure what conditions are really like on these planets...."

These planets are more massive than Earth, which might make them better prospects for life than Earth. It looks like plate tectonics, the way Earth's surface keeps getting churned up, or rather down, is really important for making a planet habitable. (December 5, 2009)

Not that astronomers know if there's an atmosphere, let alone water, on any of the three super-Earths circling Gliese 677C. But if there is: there could be life there. Then again, maybe not.

It's the Lemming's considered opinion that humans don't know, yet.

The Lemming has no trouble understanding why a human would chase after a kleptomaniac octopus. Humans like their tools, and that camera was a particularly valuable tool.

What an octopus would want with a camera: That is what puzzles the Lemming. It's not as if the octopus could have any use for the camera.

Unless, that is, humans aren't the only ones sharing videos on this planet.

Planets, Double Stars, Life: A New Look at the Odds

"Luke Skywalker would be proud. Planets like Skywalker's fictional home of Tatooine in the 'Star Wars' movie series might have more potential for habitability than planets in other systems, research suggests.

"Tatooine's dual suns might actually help prevent damaging solar winds from bombarding planets in their system, allowing for a wider 'Goldilocks zone' of habitability, Joni Clark, an undergraduate at New Mexico State University, said during a poster session at the 222nd meeting of the American Astronomical Society last week.

" '[The stars] calm each other down,' Clark told SPACE.com of her new work that expands on earlier studies examining binaries. 'It's like a really good marriage. They vent to each other, and they're not focused on anything else. They slow each other down and that causes increased magnetic protection of the planets.'..."

Not just any two stars will do. They have to be about the same mass, and be in a tight orbit around each other: circling every 10 to 30 days.

The difference between what we get in the Solar system and the 'Tatooine' stars isn't much. There's probably around a 0.7 percent reduction in what blows out from the stars: that's a difference of seven thousandths.

It's a very slight change, but might let a planet with a weaker magnetic field hold onto its atmosphere longer. Since new information about planets orbiting other stars shows that we've got billions of planets in this galaxy: even a very slight difference in the odds that a planet could support life could mean lots more planets with wet, sticky stuff growing on them.

And that, for the Lemming, is exciting news. Your experience may vary. 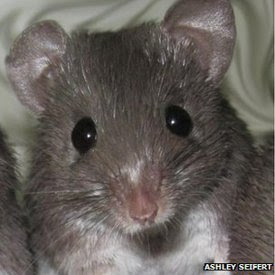 "Mice with brittle skin, which tears off in order to escape predators, may offer clues to healing wounds without scarring, according to US researchers.

"Some African spiny mice lost up to 60% of the skin from their backs, says the study published in the journal Nature.

"Unlike wounds in other mammals, the skin then rapidly healed and regrew hairs rather than forming a scar...."

Some critters, like salamanders, can regrow limbs. Mammals regrow scar tissue: handy for quick repairs, not so good as a replacement part. These oddball mice are an exception, at least where skin is involved.

The good news is that scientists may be able to figure out how the African spiny mice grow new skin, and develop ways for mammals to grow other sorts of tissue.

The bad news, sort of, is that someone will probably get upset about the process. Those mice look cute, and might not like losing skin from their backs: which the Lemming is concerned about; but learning how to regrow lost limbs or damaged organs would be nice, too. There's a balance, somewhere, between the welfare of mice and people. There are knee-jerk responses to new ideas, too: and that's another topic.

The Lemming found a rather detailed and boring discussion about the spiny mice on the NIH website: 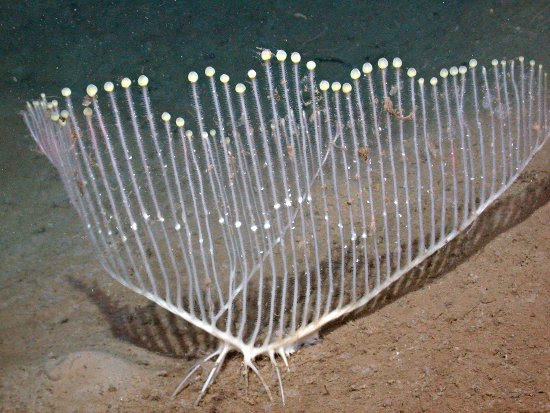 (from Monterey Bay Aquarium Research Institute (MBARI), via LiveScience.com, used w/o permission)
"...the recently discovered carnivorous harp sponge, Chondrocladia lyra, ... in Monterey Canyon, off the coast of California, at a depth of about 11,500 feet (3,500 meters)...."

" A new carnivore shaped like a candelabra has been spotted in deep ocean waters off California's Monterey Bay.

"The meat-eating species was dubbed the 'harp sponge,' so-called because its structure resembles a harp or lyre turned on its side.

"A team from the Monterey Bay Research Aquarium Institute in Moss Landing, Calif., discovered the sponge in 2000 while exploring with a remotely operated vehicle. The sponges live nearly 2 miles (3.5 kilometers) beneath the ocean's surface...."

The harp sponge probably wouldn't make a good movie monster. Mostly it just sits there, waiting for tiny critters to drift by and get caught in in the upright parts. This carnivorous sponge has dreadful table manners: it digests its prey by wrapping a membrane around it.

You might impress your friends by calling the harp sponge by its scientific name: Chondrocladia lyra. Then again, maybe not. Anyway, "harp sponge" takes less time to say.

Those little things at the bottom aren't roots, by the way. They're called rhizoids, and keep the sponge rooted in place.

Now, if only harp sponges were a hundred feet tall, walked on land, and roared: maybe they'd revive good old-fashioned movies like "Them!," "Tarantula," or "Night of the Lepus." The Lemming would say 'they just don't make movies like that any more: but there's "The Thing" (2011). Special effects have changed a bit, and that's another topic.

The article's video video was a bit on the dry side, but the Lemming enjoyed it. Your experience may vary: