Kepler-186f: Facts, Speculation, and the Lemming

"Using NASA's Kepler Space Telescope, astronomers have discovered the first Earth-size planet orbiting a star in the "habitable zone" -- the range of distance from a star where liquid water might pool on the surface of an orbiting planet. The discovery of Kepler-186f confirms that planets the size of Earth exist in the habitable zone of stars other than our sun.

"While planets have previously been found in the habitable zone, they are all at least 40 percent larger in size than Earth and understanding their makeup is challenging. Kepler-186f is more reminiscent of Earth.

" 'The discovery of Kepler-186f is a significant step toward finding worlds like our planet Earth,' said Paul Hertz, NASA's Astrophysics Division director at the agency's headquarters in Washington. 'Future NASA missions, like the Transiting Exoplanet Survey Satellite and the James Webb Space Telescope, will discover the nearest rocky exoplanets and determine their composition and atmospheric conditions, continuing humankind's quest to find truly Earth-like worlds.'

That artists' concept is optimistic, assuming that Kepler-186f has an atmosphere like Earth's, and enough water for a substantial sea, at least. Whether or not the planet looks like that depends partly on what it's made of.

Scientists have worked out plausible scenarios where an Earth-size planet could be almost entirely water: which wouldn't be particularly good for fish, since life as we know it needs a broad variety of materials and water.

The odds are, in the Lemming's opinion, that Kepler-186f is a ball of rock and metal, like Earth. If it's Earth-like that way, it could have an atmosphere as spectacularly toxic as the one humans found around Venus: or no atmosphere at all.

Or astronomers may find a damp atmosphere of nitrogen and oxygen: and be puzzled by the planet's emission spectra, until someone realizes that they're looking at neon, helium, carbon dioxide, and mercury plasma from a continent-spanning analog of the Fremont Street Experience. 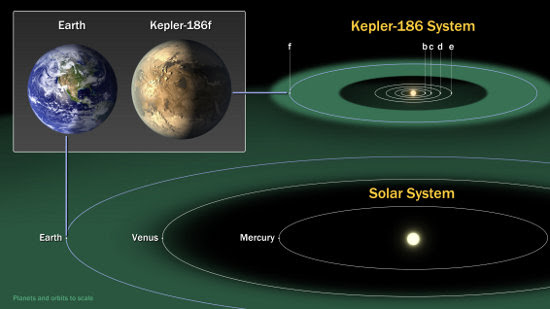 If Kepler-186f has something pretty close to Earth's chemical mix, including atmosphere, it'll probably be a tad cooler than the planet humans call home. Sunlight there at high noon is about as strong as Earth's an hour or so before sunset.

Kepler-186f is closer to its star than Earth: but its star is a whole lot dimmer than Sol. 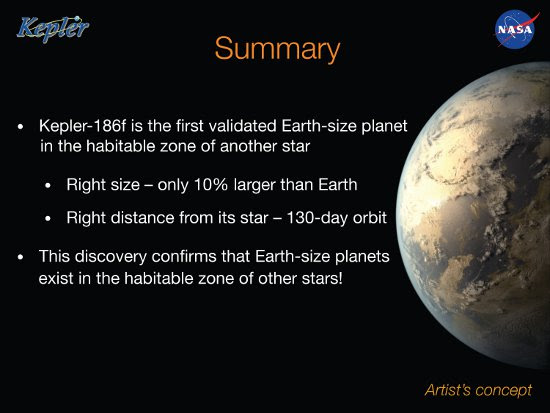 (From NASA, used w/o permission.)

Until last week, scientists knew that planets orbit other stars, and that roughly 1/6 of the stars in this galaxy have planets roughly the same size as Earth. That works out to about 17,000,000,000 planets, give or take a few million, by the way. But they didn't know that any of these Earth-size planets orbited their stars far enough out for water to be a liquid.

Earth could have been a statistical fluke: a one-of-a-kind freak in an otherwise-lifeless universe.

Now scientists know of a planet that's only 10% wider than Earth, in an orbit that keeps it only slightly cooler than Earth. And they found it only 20 years after spotting the first planet circling another star.

Humans: They're not doing badly, at all.

From the Mind of the Lemming: Just Outside Hobbiton (maybe) 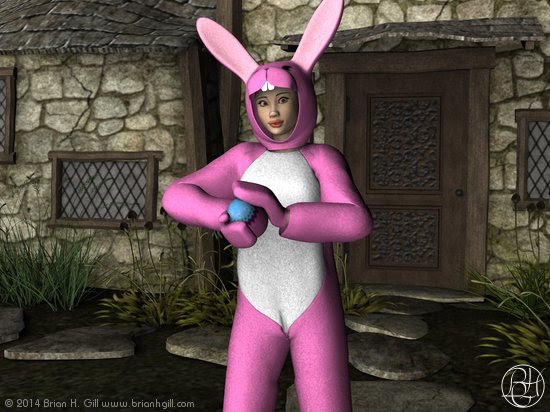 Easter egg hunt in Hobbiton? The Lemming has no idea whatsoever.

Labels: art, Easter, from the mind of the Lemming, holidays

Yosemite, Hudson School, and All That 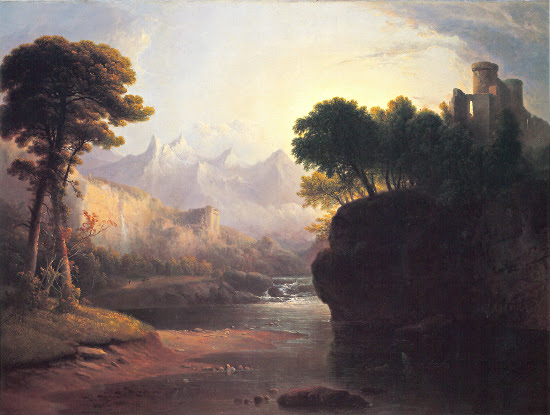 One thing the Lemming has noticed about nature is that it's big: very, very, big. Small wonder that artists like Thomas Doughty get carried away while painting their landscapes.

Thomas Doughty was with the Hudson River School, which had more to do with the Catskills and Adirondacks than pencil sharpeners and blackboards: although blackboards actually were black back then, and that's another topic.

Anyway, another Thomas took at least part of Horace Greeley's advice, and went west: all the way to California. 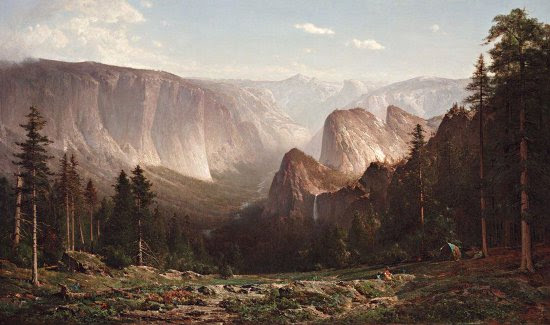 That's "Great Canyon," not "Grand Canyon," which is an unreasonably big washout in another state. Oddly enough, humans in these parts get upset over little washouts, but make a tourist attraction out of one that's a mile deep.

Granted, the Grand Canyon is scenic: and got started long before any humans wandered into this continent, and that's another topic.

Where was the Lemming? Adirondacks, pencil sharpeners, erosion: right.

Thomas Hill's paintings of Yosemite may not be exact representations of the landforms there, but he didn't exaggerate the scenery by much. In Yosemite, there's little need: the place is spectacular. 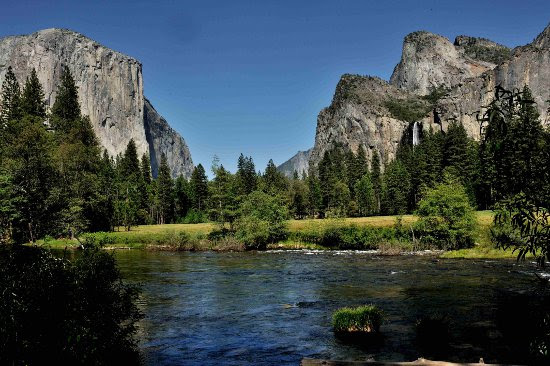 (From GuyFrancis, via Wikimedia Commons, used w/o permission.)
"U shape valley Yosemite" 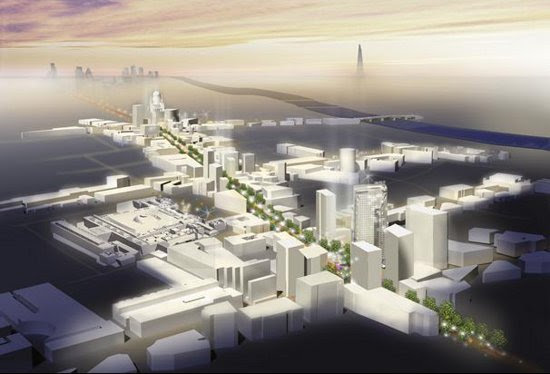 (From Architects Journal, used w/o permission.)

"[First look] Terry Farrell and Partners has revealed his masterplan to revamp the Holborn, Bloomsbury and St Giles areas of London

"Re-branded 'Midtown', the district is expected to undergo major regeneration with the arrival of Crossrail in 2018.

"Tass Mavrogordato, chief executive of project-backer InMidtown BID, said: 'We will be more impacted than anywhere else by the opening of London's two biggest Crossrail stations in Farringdon and Tottenham Court Road...."

That aerial view of Farrell's proposed London makeover is an attractive picture.

Making a nifty picture is one thing, planning a detailed renovation of even part of a city is something else. The Lemming didn't know whether this was one of those visionary projects that nobody really expects to work: or something that Londoners could actually use.


Trees, Umbrellas, and No Fences in the Streeet 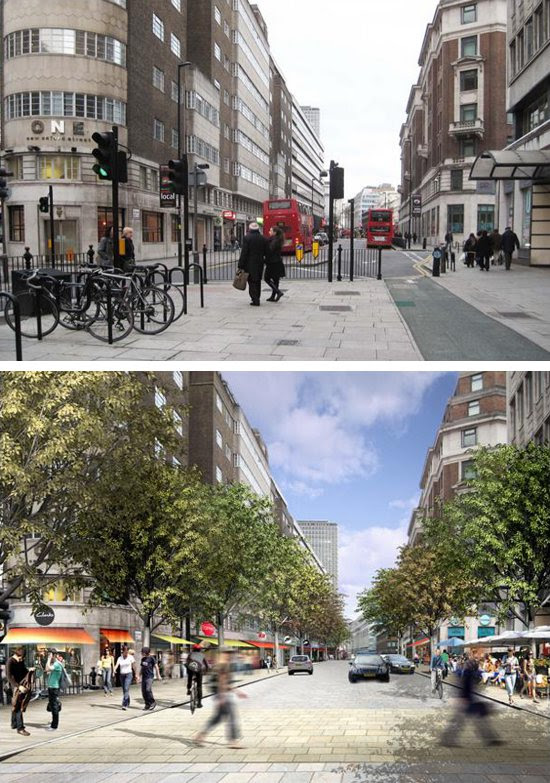 (From Architects Journal, used w/o permission.)

Judging from those before-and-after pictures from the Architects Journal article, it looks like Farrell's idea is to take some of the fences out of the street, add trees, and set up a sidewalk cafe or two.

The sidewalk cafe may or may not work out; the trees look nice, but will need watering; and — how did anyone think that putting fences in a street was a good idea in the first place?!

No matter. Another four years, and at least one London street can be used as a street again. That's progress, the Lemming supposes.