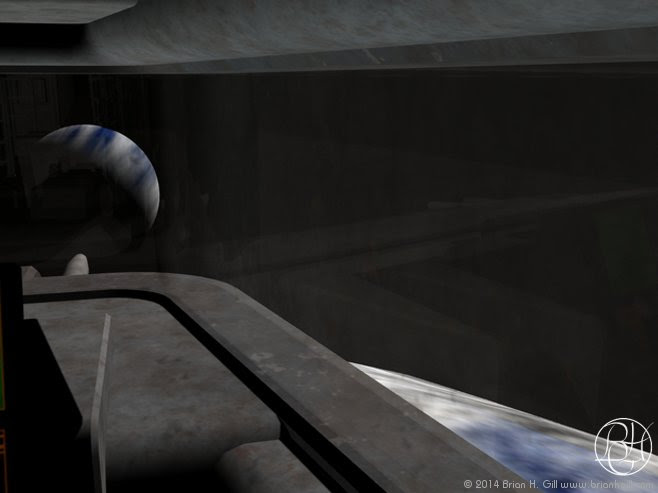 Earlier this month, some humans announced that they'd done the math: and collisions like the one involving Earth a few billion years back can end with two Earth-size planets, orbiting each other.

The Lemming found a pretty good writeup about their research, complete with an "artist's concept" that probably isn't all that inaccurate. It's certainly a cool picture:
Not just any old collision will do: but they got double planets in a third of their simulations.

How many double planets there are, what fraction are roughly Earth-size, and how many of those have the qualities that makes Earth comfortable for humans — that's something that the Lemming is confident humans will figure out. Given time.

About this post's picture? It's strictly fictional. Not a photo. Definitely not: and the Lemming's sticking with that story.

Labels: exoplanets, from the mind of the Lemming, science fiction 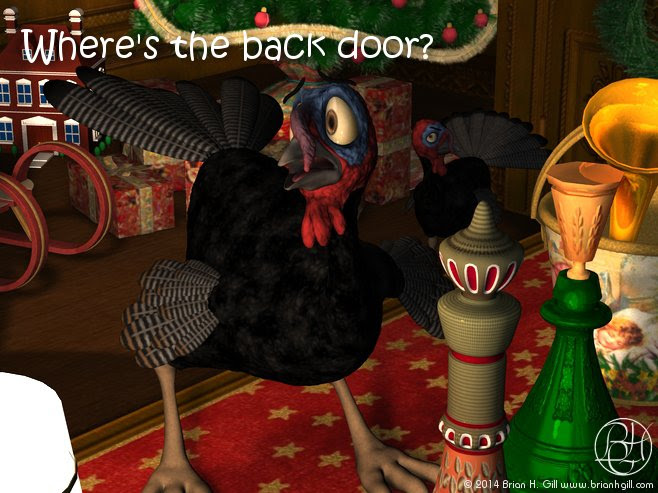 (Desperation in a gift shop.)

Have these turkeys tasted freedom at last, or is their goose cooked?

Is the gift store gambit a recipe for disaster, or will it pan out?

Will the shopkeeper make mincemeat of their plans and squash their hopes?

And will the Lemming ever tire of holiday puns?

Labels: cartoons, dark humor, from the mind of the Lemming, holidays, humor, Thanksgiving 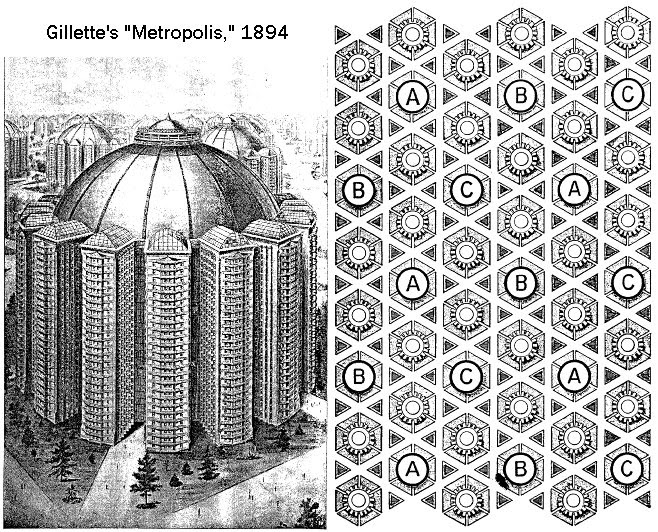 "Under a perfect economical system of production and distribution, and a system combining the greatest elements of progress, there can be only one city on a continent, and possibly only one in the world. There would be outlying groups of buildings in different sections of the country for the accommodation of those who were, for limited periods, in the field of labor, and also others that would be occupied as resorts of pleasure in season; but the great and only 'Metropolis' would be the home of the people...."

A major problem with this proposal is in the third word of the first paragraph. It's been the Lemming's experience that humans don't do "perfect." "Not bad," "it'll do," "it could be worse," yes: "perfect," no.

To Mr. Gillette's credit, he realized that a city needs power: which is why his Metropolis was set east of Niagara Falls. Humans still draw energy from water flowing downhill, which helps explain Las Vegas. As usual, where humans are involved, it's more complicated than that.


"...Here should be located the great central city, which would be the home of all; and to the artistic beauty, grandeur, and magnificence of this wonderful production of the combined intelligence of a united people, the whole world would contribute its wealth and treasures...."

King C. Gillette was a smart man. He invented a very practical safety razor — he's that Gillette — and put quite a bit of thought into the physical design of his Metropolis.

He was also a utopian socialist, and thought all industry in the United States should be owned by one company, with everyone living in one city.

Bear in mind that this was back in the 19th century: long before anyone tried putting his nifty ideas into practice.

It's possible to build a city in some arbitrary spot, and make it work. Brasília, for example, is east of the Tocantins River headwaters, more or less, because Brazil's national government said that's where the country's capital should be.

Most cities, though, grow where humans are getting something done. Some of Earth's largest cities are break-in-bulk points, where humans haul stuff from one form of transportation to another.

That's why humans have been building at Londinium for some 10,000 years now. The locals are calling it "London" now, and it'll probably be a population center 10,000 years from now.

Crossroads are another favorite, and some cities grow because there's a valuable natural resource nearby that's needed for some industry. 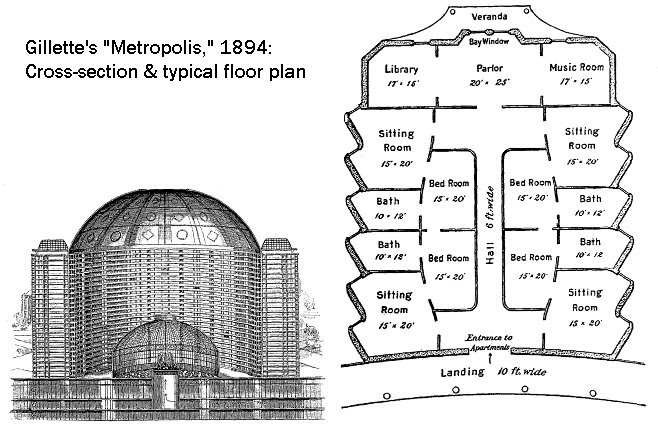 Most American houses and apartments don't have "sitting rooms" these days, but Gillette's floor plan has features that could be used today.

That zigzag outer wall, for example, gives each apartment a dozen windows on the side walls: without having tenants staring into the neighbor's home.

Gillette's paper showed how these huge apartment blocks could be built, one tower at a time: presumably with the central dome added after the ring was complete.

Social and economic aspects aside, Gillette's residential blocks strike the Lemming as having workable features. That hundred-yard-tall domed atrium could be a really nice feature this time of year: where the Lemming lives, in Minnesota.

On the other hand, one of those 25-story apartment buildings would have 450 units. At six people per unit, that's 2,700 folks living in one building. Two of them would have room for everyone living in the Lemming's town, with room left over.

It's a little hard to imagine a good reason for going to the trouble of building something that size here, though. 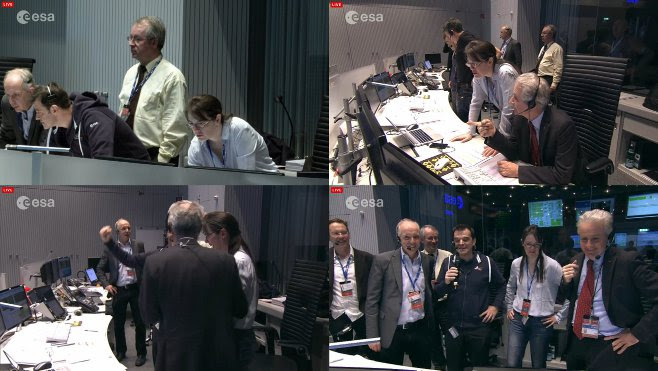 Those humans had good reason for being cheerful. They were at the European Space Operations Centre in Darmstadt, Germany — and were getting 'I'm here' signals from their Philea lander.

Kudos, humanity: one of your robots landed on a comet. Granted — Philae bounced a few times, fetched up, maybe on its on its side, and definitely not where it should be — but it's working, sending back data, and may have enough power in its battery to last until tomorrow afternoon. Maybe longer.

It could have been a lot worse: and is pretty good for a first try. 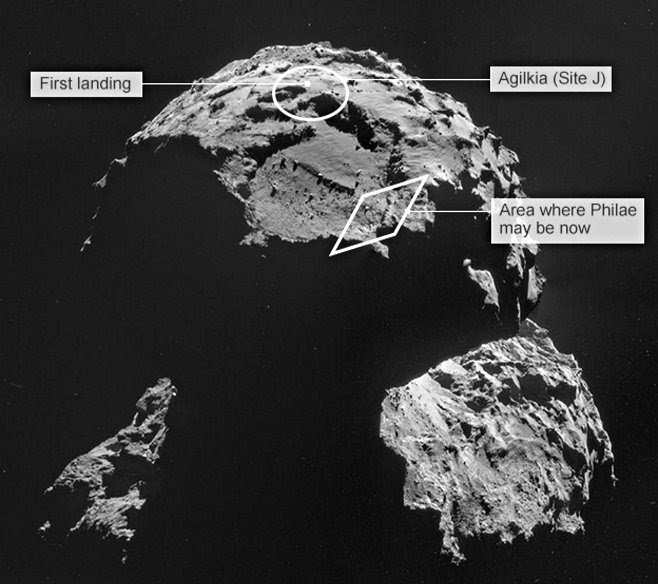 (From European Space Agency, via BBC News, used w/o permission.)
("Some radio data suggests the probe may be about 1km from the intended landing site"
(BBC News))

"After a historic but awkward comet landing, the robot probe Philae is now stable and sending pictures - but there are concerns about its battery life.

"The lander bounced twice, initially about 1km back out into space, before settling in the shadow of a cliff, 1km from its intended target site.

"It may now be problematic to get enough sunlight to charge its battery systems....

"...Telemetry indicates it is on a slope or perhaps even on its side.

"Certainly, one of its three feet is not in contact with the surface.

"Philae is receiving about 1.5 hours of illumination during every 12-hour rotation of the comet.

"This will be insufficient to top up its battery system once the primary charge it had on leaving Rosetta runs out. That was some 60-plus hours...."

The Lemming appreciates that phrase: "...the key issue vexing controllers...."

To "vex" is "to annoy, as with petty importunities."

Sure, Philae may not last as long as mission planners hoped: but it landed, is in one piece, and still on speaking terms with its orbiter. This is pretty much good news.

From what the Lemming's read, nine of 10 experiment packages Philae carries are in good shape: and scientists may even get a chance to use the lander's drill.

Besides, what is it you humans say? "Any landing you walk away from is a good one." Philae has "legs," but couldn't walk anyway: the point is that this robot landed.

Philae didn't crash. It's still got power, and mission planners have most of a day before the batteries run out. Maybe engineers will get the robot right-side-up and in full sunlight before then. Even if they don't, right now it looks like the Rosetta lander will get some serious science done before it's done.

Optimists, Pessimists, and the Lemming

From the Lemming's viewpoint, some news about Philae's landing was written by pessimists who see the glass as half-empty and leaking. Not that BBC piece. Jonathan Amos did okay.

And of course there's the usual kvetching about how many resources were 'wasted' on the Rosetta mission, instead of being spent on the reporter's — or, more likely, editor's — pet peeve. 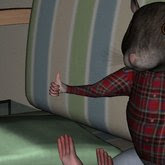 The Lemming thinks you humans deserve a Lemming's 'thumbs up' for a job well-done, on the Rosetta mission so far. There's more to life than landing on comets, of course: but you've got brains, and in this case you used them.

From the Mind of the Lemming: Mr. Chuckles 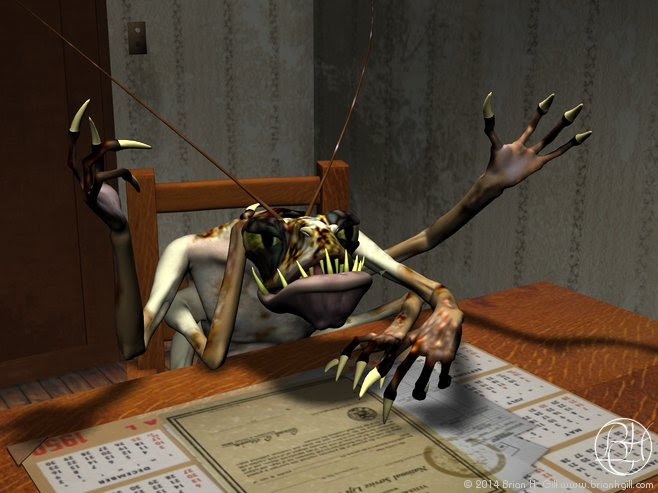 Pictures in the Lemming's album are labeled: cryptically. The note for this one says "Mr. Chuckles."