'One Small Hop for a Grasshopper...' SpaceX's Reusable Rocket

"A privately built rocket prototype that could lead to a completely reusable spaceflight system has passed its biggest test yet - a 12-story hop and smooth landing.

"The experimental reusable rocket, called the Grasshopper, made its highest and longest flight yet on Dec. 17, marking the prototype's third successful test by the private spaceflight company SpaceX.

"In the latest test at SpaceX's proving grounds in MacGregor, Texas, the Grasshopper rocket flew for 29 seconds and reached a height of more than 130 feet (40 meters). A video of the Grasshopper test flight shows the rocket soaring up into the Texas sky, then smoothly descending to land on four spindly legs...."

We're a long way from routine commercial flights to orbital hotels, research labs, and way-stations to the stars: but the Grasshopper is an important step in that direction. Or hop.

What's important about the SpaceX Grasshopper and other reusable launch vehicles is that they're - reusable. Even the Space Shuttle had throwaway booster rockets and fuel tanks. That's okay for government-funded flights to the International Space Station: but no way to run an airline. Spaceline?

Think about it: how long would a commercial air carrier last, if the company had to throw away most of each airliner after one flight?

You were warned: here's another post from the Lemming.

It's not the 1986 Perry Como Christmas Special, but the Lemming enjoyed watching and listening to these YouTube videos of Christmas season yard displays. Your experience may vary:

Christmas Eve With the Lemming

It's Christmas Eve, December 24, 2012. I'm pretty sure that we'll be seeing less about the Mayan calendar's long cycle now. Discussion, sensible and otherwise, of the recent mass murder in Newtown, Connecticut, will probably linger for a bit longer: but I'm fairly certain that it will fade after a few more weeks.

I discussed the latest 'end of the world' story, and the tragedy in Connecticut, in another blog:
The Lemming usually has something weirdly funny to show during the Christmas season. This year, the Lemming's heart wasn't in that project. 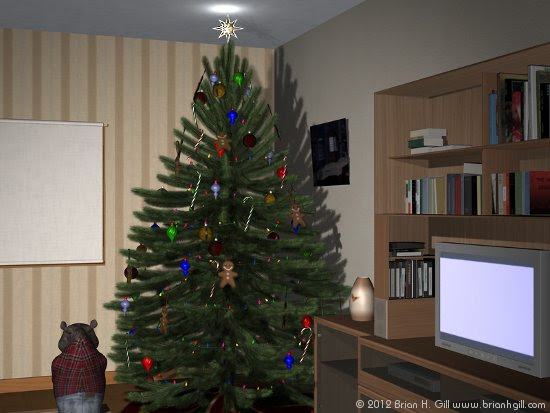 Check back in a few hours, though. The Lemming may have something 'seasonal' ready by then. Then again, maybe not.

"Instagram says it now has the right to sell your photos"
Declan McCullagh, (December 17, 2012)

"In its first big policy shift since Facebook bought the photo-sharing site, Instagram claims the right to sell users' photos without payment or notification. Oh, and there's no way to opt out...."

"We know these documents are a little dry, but they’re very important. Please take a moment to read through them so you keep feeling comfortable sharing your beautiful photos on Instagram."

The Lemming was right.

"...Rights
The Lemming has run into, and occasionally used, free services which pay their bills by using their users' content for marketing and advertising. That condition is no problem for the Lemming, since much of what the Lemming produces helps the Lemming - no matter where it's displayed.

Not everybody is like the Lemming, thankfully. Who needs a world full of flannel-clad lemmings? CNET's Declan McCullagh has a point: folks who don't want their photos used to sell some product probably don't want to use Instagram.

For the Lemming, it's an academic point. The Lemming doesn't use Instagram. Folks who do - probably want to re-think using that particular service.

The really interesting part, from the Lemming's point of view, is "...If you are under the age of eighteen (18)...." Using underage models for advertising, even with the safeguards Instagram has in that agreement, seems to be asking for trouble. In the Lemming's opinion.


Daft Contracts, the Government, and the Lemming

Springing surprises like Instagram's new Terms of Service on customers and clients is one thing. Folks can often find another business that isn't quite so clueless about what folks do - and don't - expect.

When a government starts, ah, 'protecting' folks - that's another topic.

(A tip of the hat to CNET, on Google+, for the heads-up on Instagram's new policy.)

"University of Minnesota architecture and landscape architecture graduate students showed Duluth civic and business leaders what their finished projects might look like once the city's trouble spots are turned into treasures.

"Imagine waking up in your bedroom in what had been an idle ore dock on Duluth's waterfront - with stores, offices and restaurants down the hall and an outdoor skating arena just outside your door.

"...An effort by 36 graduate students in the University of Minnesota's College of Design did more than just imagine those scenarios - they spent the fall quarter of their final year in school designing and planning the projects. On Wednesday, the grad students in architecture and landscape architecture showed Duluth civic and business leaders what the finished projects might look like...."

Duluth, Minnesota, across from Superior, Wisconsin, is half of a port city at the west end of the St. Lawrence Seaway. Taconite pellets get transferred from rail cars to ore carriers on a series of huge ore docks. One of those docks isn't in use.

Some of the students saw that expanse of unused ore dock, and started thinking. They propose "...transforming the massive structure of wood and steel into a multi-use destination with condos, shops and public recreation space. Their concept even turns the giant ore-loading chutes into bleachers for an outdoor skating arena...."
(December 13, 2012)

Others have plans for parts of Duluth that are unused or hard to maintain. Then there's old Casket Quarry in West Duluth. It's already being used for ice climbing - unofficially. What some students suggest is officially recognizing what's already being done, and re-engineering the place a bit.

Attack of the Infographic, or, Break the Creative Block Before it Breaks You

"How Can We Overcome the Creative Block (Infographic)"
Spyros Thalassinos, make your ideas art (December 3, 2012)

"Creative block is the inability to access the flow of inspiration and creativity. It can last for days, months, and in some cases years. See how you can overcome it, with this cool infographic: 10 Fun Ways...."

Some of the advice could be over-budget for the Lemming, like "take a vacation."

It's like the 'how to manage your money' books that start out by suggesting that you sell one of your yachts. Oh, well: the "vacation" thing says "roam around your town," after "visit another country:" maybe the Lemming is being too harsh.

"Diversify interests?!" More often, the Lemming's problem was sticking with one interest long enough to write a coherent paragraph: which might or might not have anything to do with coherent light, or "lasers;" or tasers - - - you see what the Lemming means?

Then there's "follow the stars," which may or may not refer to movie stars whose talents are - - - no, the Lemming really doesn't want to be too harsh. Aha! "In your industry," so "star" means someone who actually is competent: not an astronomical body characterized by thermonuclear fusion and lots of really hot gas; which reminds the Lemming of Congress.

Where was the Lemming?

Point number nine is "be a kid again." "Again?" Chronological progression notwithstanding, the Lemming never stopped being a kid. Then there's the distinction between being childlike and childish, and that's yet another topic. Topics.

One more thing: the actual infographic is a bit over twice the linear dimensions of the copy in this post.

That makes it over four times the size in terms of area, but quite a few folks would say 'about twice as big' anyway, without specifying what "big" meant in that particular context.

Then there was the textbook that said "diameter," when the dimension was obviously circumference: and that's - what else? More topics.

A tip of the hat to Steve Farnsworth, on Twitter, for the heads-up on that infographic.