The Coconut Crab: No, It's Not From a Science Fiction Movie

"The coconut crab, Birgus latro, is the largest land-living arthropod in the world and is probably at the limit of how big terrestrial animals with exoskeletons can get under the prevailing conditions. Their body is divided into four regions; the cephalic lobe, forepart, trunk, and opisthosoma. It is a highly apomorphic hermit crab and is known for its ability to crack coconuts with its strong pincers in order to eat the contents. It is the only species of the genus Birgus.

"It is also called the robber crab or palm thief, because some coconut crabs are rumored to steal shiny items such as pots and silverware from houses and tents...." 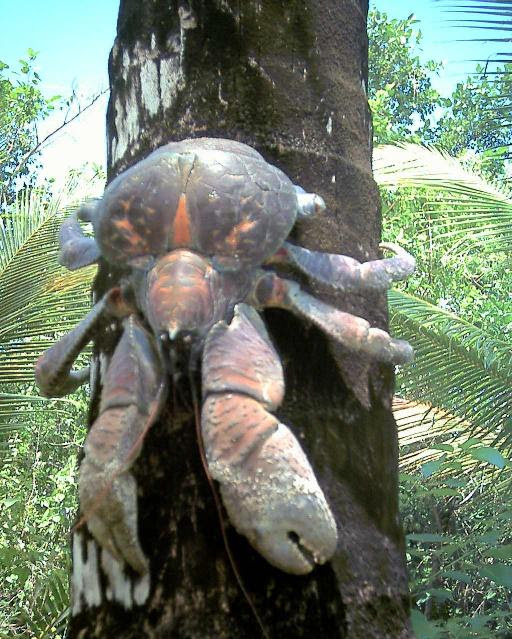 (From A Comprehensive Account Of The Biology And Conservation Issues, used w/o permission)

The AbsoluteAstronomy article doesn't say how big the coconut crab is - but another source says the body can be 16 inches long. The things climb trees, and those big claws can lift up to 64 pounds.

The creatures have a branchiostegal lung - which seems to be distinct from the book lung that other arthropods have.

One of my daughters introduced me to coconut crabs today, by way of this photo: 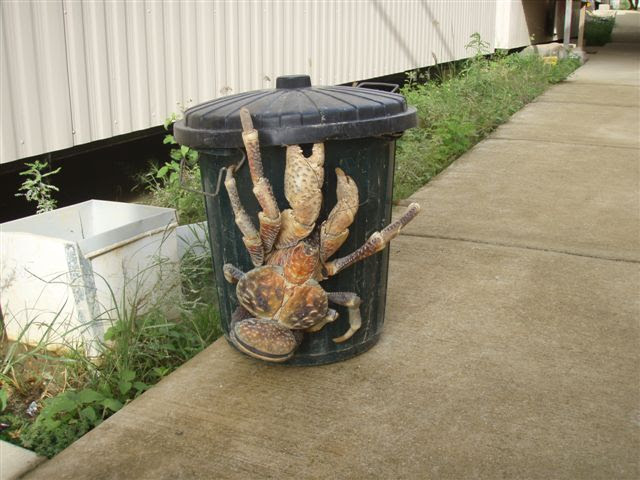 I did a little checking around, and although there are some posts and articles online which struck me as being of the 'I can't believe something like this exists, so it doesn't' variety, coconut crabs really do exist; they're big; they've got really strong pincers; and did I mention: they're really big?

And, 'take me to your leader' appearance notwithstanding, I found no reason to assume that they're not from Earth. I won't find them in Minnesota, though: as the "coconut" part of their name implies, they're tropical creatures.

I also found quite an interesting writeup about avian lungs in AbsoluteAstronomy's Lung article - but I'm running short on time, and besides: it's off-topic.
Posted by Brian H. Gill at 11:56 PM

That's amazing.
The crab is so big.

Sorry about the excessive delay - the Lemming finally realized that comments were piling up.

That thing is F*cking horrific...