Friday is what keeps Thursday from running into Saturday. It's either the fifth or sixth day of the week, or the last day of the work week, or the day that isn't Labor Day in the United States: ever.

It's named after Venus, or would be if English wasn't a Germanic language. Folks called it Frīġedæġ when English was Old English - but oddly enough it's not called New English now. The language, that is: not the day. That's Friday.

The Lemming had something in mind: not figs, but sort of like that.

Right! Frīġedæġ means the "day of Frigg," which doesn't have anything to do with figs. Frigg is supposed to be the Old English goddess Frige, sort of like the Norse Freyja, or maybe not.

And none of them have anything to do with figs. Unless maybe they'd have liked Fig Newtons, which weren't invented yet. On the other hand, Fig Newtons are made by the Nabisco company, "Newton," "Nabisco," and "Norse" all start with "N" - and there isn't a single "N" in Frigg, Freyja, Friday, or Saturday either.

And if that isn't suspicious, the Lemming doesn't know conspiracy theories.

Most of this came from the Wikipedia page about Friday, except for what happened after the Lemming stayed up too late.

Posts that have nothing much to do with this one:

Filberts, Fardels, and a Rambling Lemming

"Then & Now: From Filberts to Hazelnuts"
The Agriculture Quarterly, Oregon Department of Agriculture

"Did you know that the entire U.S. hazelnut crop is grown in the Pacific Northwest? Most U.S. grown hazelnuts are produced in Oregon's Willamette Valley with a small portion coming from Whatcom County, Washington. Hazelnut trees experience an alternate year bearing cycle which accounts for much of the fluctuation in yield from year to year, but the market is generally considered strong and the Oregon hazelnut industry is healthy and growing....

Don't bother looking for the Oregon Filbert Commission. It's not there any more. Or, rather, it's operating under an alias.

They changed the name to the Oregon Hazelnut Commission in 1994. Folks in Europe like filberts, but they call them hazelnuts. Tomayto, tomahto, not that filberts have anything to do with Fred Astair. Apart from starting with the letter "f," that is, and the Lemming has more to say about filberts and fardles.

We call hazelnuts filberts because nois de Filbert means "nut of Philibert" in Old French. Saint Philibert's feast day is in late August, which is when hazelnuts ripen. Philibert's name got a "Ph" somewhere along the line, but the hazlenut didn't. (the Free Online Dictionary)

Or maybe we call those things filberts because filu means many and beraht means bright in Old High German. Then again, maybe not.

None of that has much do do with Fred Astair, filberts, or what the Lemming was looking for, which is a picture of filberts. 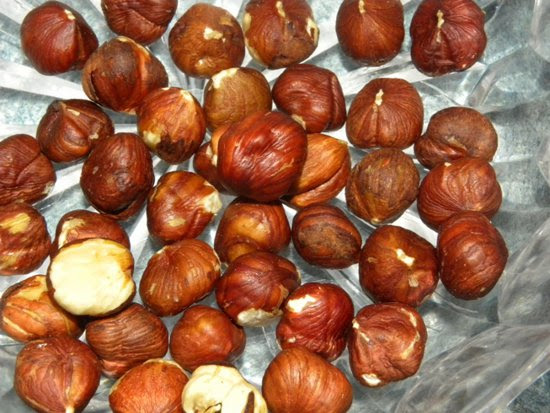 "...In 1995, evidence of large-scale Mesolithic nut processing, some 9,000 years old, was found in a midden pit on the island of Colonsay in Scotland. The evidence consists of a large, shallow pit full of the remains of hundreds of thousands of burned hazelnut shells. Hazelnuts have been found on other Mesolithic sites, but rarely in such quantities or concentrated in one pit..."


A Fardel by Any Other Name

A bag of filberts could be a fardel, but that's probably not what Shakespeare had in mind when he wrote this Brobdingnagian sentence for Hamlet:

"To die,-to sleep,-
To sleep! perchance to dream: ay, there's the rub;
For in that sleep of death what dreams may come,
When we have shuffled off this mortal coil,
Must give us pause:11 There's the respect
That makes calamity of so long life;
For who would bear the whips and scorns of time,
The oppressor's wrong, the proud man's contumely,
The pangs of despised love, the law's delay,
The insolence of office, and the spurns
That patient merit of the unworthy takes,
When he himself might his quietus make
With a bare bodkin? Who would fardels bear,
To groan and sweat under a weary life,
But that the dread of something after death,
The undiscovered country, from whose bourn
No traveller returns, puzzles the will,
And makes us rather bear those ills we have
Than fly to others that we know not of?"
("Hamlet," Act III Scene 1, Shakespeare, via Gutenberg.com)

That heading, "A Fardle by Any Other Name" would be funnier, if "a [blank] by any other name" came from Hamlet. Hamlet isn't particularly funny, by the way. By the time it's over King Hamlet, Polonius, Ophelia, Rosencrantz and Guildenstern, Gertrude, Hamlet, Laertes, and Claudius are dead: variously poisoned, stabbed, or drowned.

That phrase is from another Shakespeare play: one with a slightly lower body count. Only Mercutio, Tybalt, Paris, Romeo, and Juliet get poisoned or stabbed. Lady Montague dies of grief.

Juliet says "a rose ... by any other name" in "Romeo and Juliet." It's part of this rather nice soliloquy:

"What's in a name? That which we call a rose
By any other name would smell as sweet."


Toward the end of that play Juliet impersonates a corpse, Romeo says "Here's to my love" and drinks poison, Juliet wakes up and stabs herself - and this is romantic?! 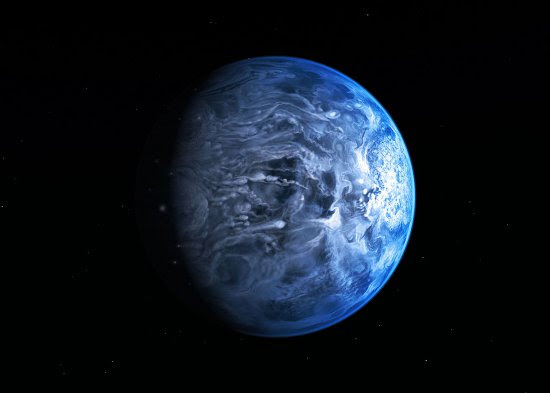 (NASA, ESA, M. Kornmesser, via Space.com, used w/o permission.)
"This illustration shows HD 189733b, a huge gas giant that orbits very close to its host star HD 189733. The planet's atmosphere is scorching with a temperature of over 1000 degrees Celsius, and it rains glass, sideways, in howling 7000 kilometer-per-hour winds. Image released July 11, 2013...."

" Call it the deep blue dot. For the first time, scientists have seen the visible color of a distant alien world. The exoplanet - called HD 189733b - is 63 light-years from Earth and a 'deep cobalt blue,' with raging storms of glass rain and super-fast winds, scientists say.

"The alien planet's blue color was pinned down using observations from the Hubble Space Telescope. Although the planet might be the same color as Earth from space, scientists think that HD 189733b is a 'hot Jupiter' - a gas giant planet that orbits very close to its star. It takes 2.2 Earth days for the planet to travel fully around its sun...."

The scientists found HD 189733b's color by tracking colors of the planet and its star. When the hot Jupiter went behind its star, light from the system dropped in the blue end of the spectrum.

"...The exoplanet's weather is less than ideal. Its atmosphere is more than 1,832 degrees Fahrenheit (1,000 degrees Celsius) and the planet rains glass sideways in 4,350 mile per hour (7,000 km/h) winds, according to Hubble officials...."
(Miriam Kramer, Space.com)

A world where it's hot enough to melt brass is definitely "less than ideal" for critters like humans. Life on Earth is built of nucleic acids and proteins dissolved in water. That may be the only possible chemical brew for life: or not. (March 15, 2013)

Either way, HD 189733b is a satisfactorily odd planet, from the Lemming's point of view: so it's cool, sort of.

Another - Thing - From the Burgess Shale 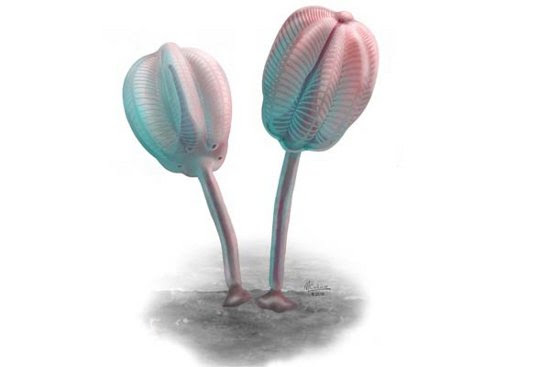 (Marianne Collins, via University of Toronto, used w/o permission)

"A bizarre creature that lived in the ocean more than 500-million years ago has emerged from the famous Middle Cambrian Burgess Shale in the Canadian Rockies.

"Officially named Siphusauctum gregarium, fossils reveal a tulip-shaped creature that is about the length of a dinner knife (approximately 20 centimetres) and has a unique filter feeding system.

"Siphusauctum has a long stem, with a calyx - a bulbous cup-like structure - near the top that encloses an unusual filter feeding system and a gut. The animal is thought to have fed by filtering particles from water actively pumped into its calyx through small holes. The stem ends with a small disc which anchored the animal to the seafloor. Siphusauctum lived in large clusters, as indicated by slabs containing over 65 individual specimens...."

These submerged tulip-animal-things were about as long as a butter knife: 8 inches, 20 centimeters.

Like other critters caught in the Burgess Shale, siphums were very well preserved: so scientists have a very good picture of how their innards fit together. They may not have had the colors we see in that picture, or maybe they did.

That article says the siphums are tulip-shaped. To the Lemming they look more like bell peppers, not that it really matters.


More Than You Need to Know About an Extinct Animal 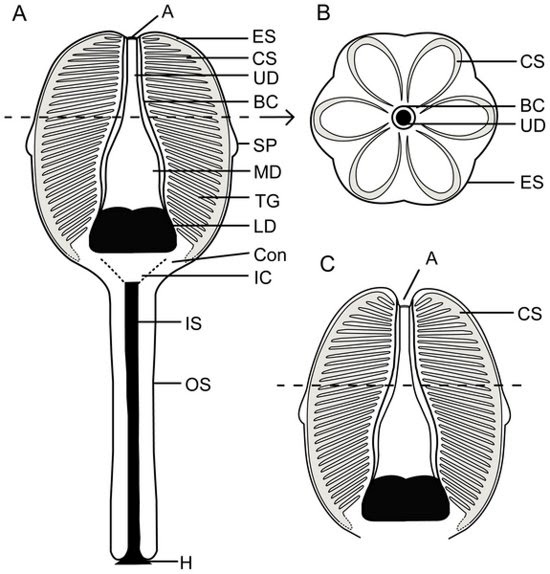 If you still need to know more about Burgess Shale and the critters caught in it, the Lemming recommends www.burgess-shale.rom.on.ca.