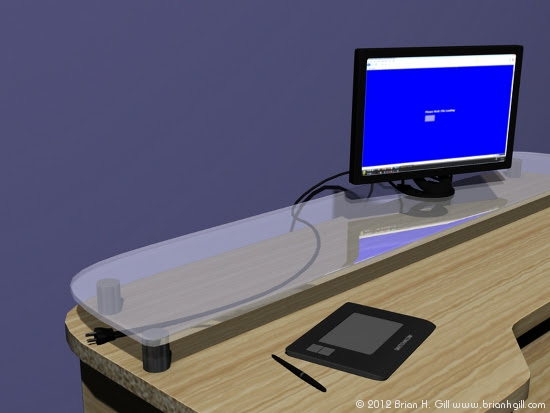 Antimatter Rocket Motor: Physics, Straightforward; Engineering, Not So Much

"The hybrid designs (ACMF and AIM) discussed in previous sections seem quite complicated. They require the juxtaposition of the three highest energy yielding technologies known to humankind just to create a spacecraft that is barely capable of leaving the solar system. What if...."

The physics are fairly straightforward. What's holding up production, apart from the rather small demand for interstellar vehicles, is our lack of technology. For one thing, humanity doesn't have magnets that are light enough for a practical vehicle - and, perhaps more to the point, can operate at extremely high temperatures.


Impractical: At the Time

The Lemming is reminded of the situation when Tsiolkovsky published 'The Exploration of Cosmic Space by Means of Reaction Devices" back in 1903. His equations were interesting, but quite impractical.

At that time, even cutting-edge propulsion technology, like the diesel engine, didn't have anywhere near enough power to lift a vehicle into low Earth orbit - let alone send something to the Moon or Mars. (Wikipedia)


"When it's Time to Build Spaceships..."

In the Lemming's opinion:
We're probably not decades away from antimatter rockets, as folks in 1903 were only a half-century away from space flight. But the Lemming isn't inclined to think that traveling outside the Solar system is 'impossible,' either.

There's some interesting theoretical work on a warp drive, too. Again, the energy requirements are staggering, the warp field might not be stable, and keeping passengers alive would be difficult. But 'impossible?' The Lemming is not ready to say that.

Then there's the question of why we're not up to our hips in the space-alien equivalent of 50-gallon oil drums.

"An alien planet discovered around a star in the Alpha Centauri system, the nearest to our own sun, has astronomers buzzing, and not just because it's the closest exoplanet to Earth ever seen.

"The newfound extrasolar planet Alpha Centauri Bb, it turns out, is not only the nearest alien world to Earth, it's also extremely Earthlike in size and mass. The planet is much too hot and too close to its parent star to support life, but its existence suggests the tantalizing possibility that there may be more planets waiting to be found in our neighboring star system.

"Here's a look at the numbers behind the newfound alien planet Alpha Centauri Bb:...

"3.6 million: The distance, in miles, at which the planet orbits its parent star Alpha Centauri B. This is much closer to the star than Mercury is to our sun. Earth is 93 million miles (150 million km) from the sun...."

Astronomers have found hundreds of exoplanets: planets orbiting other stars. What makes Alpha Centauri Bb stand out is it's mass, very nearly the same as Earth; and that it's very close.

"Close," that is, compared to most stars. Alpha Centauri A, B, and C are the nearest (known) stars: only four and a quarter light years away.

That's almost in Earth's back yard, compared to the size of our galaxy. Even Gliese 581, 20 light years away, is a close neighbor on a galactic scale. 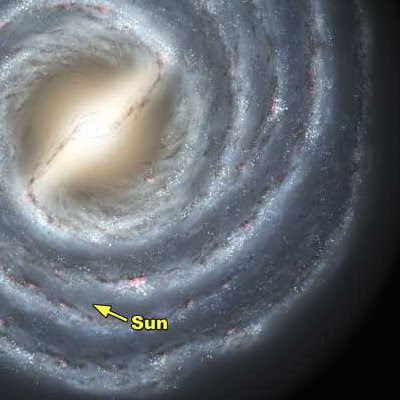 (from Department of Physics, University of Oregon, used w/o permission)

On this scale, each pixel is well over 100 light years across. Sun and Gliese 581 are in the same pixel.


Too Hot for Life?

Alpha Centuari Bb "is much too hot and too close to its parent star to support life" is accurate, as far as it goes. The statement assumes that "life" is limited to "life as we know it," the sort of nucleic acid/protein (O) in water variety here on Earth. Maybe that's the only kind anywhere.

Then again, maybe "life" doesn't need to be the nucleic acid/protein in water mix that's comfortable on Earth. Life using fluorosilicone in fluorosilicone instead of our organic mix might be right at home on a nearly red-hot world.

Or maybe critters made of lipid in hydrogen live in the borderlands of our own planetary system. (Drifting at the Edge of Time and Space (April 12, 2010)

Some announcements of exoplanets are disputed, and occasionally turn out to be a misinterpretation of noise in the data. This time, it looks like Alpha Centauri Bb is very real: but time will tell.

"Chevy Spark"
"Soon to be an URBAN LEGEND"
Chevrolet.com

"...The globe was our proving ground - and this engine came back tested and approved by people all over the world. It tackled some of the most difficult and demanding international terrain - city streets with hills included. But Hill Start Assist won’t let them drag you down by keeping the brake engaged for the split second it takes for your foot to move from the brake to the accelerator...."

Oddly enough, the Chevy Spark doesn't harness static cling as a power source. What makes the Spark go is a fairly conventional internal combustion engine. (Wikipedia) That could change next year, when an all-electric Spark rolls into the market. (Wikipedia) Or, not.

What impressed the Lemming about the Chevy Volt, with its electric drive, was that the car actually worked: and had enough speed and acceleration to make do on American streets and roads.

Electric cars had been around for decades, and were a good choice if you wanted something with no exhaust fumes: and a top speed well in excess of 10 miles an hour. Golf carts are a pretty good example.

The Lemming may be back in a week or so, with more about the Spark. Then again, maybe not.

A Cartoon Silhouette World Filled With - - - Stuff, Familiar and Otherwise 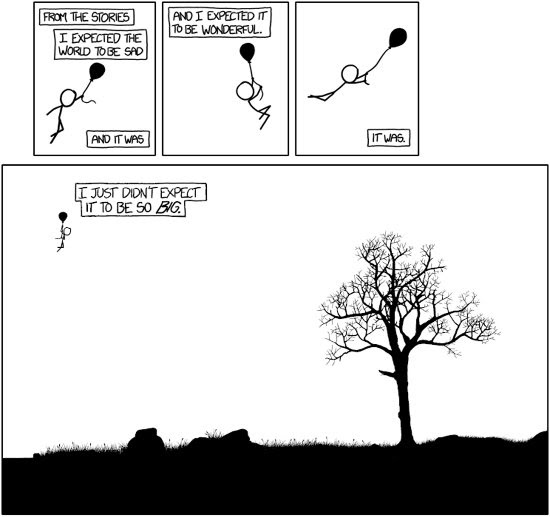 "Click and drag" is what you do in the bottom panel of this particular xkcd comic. It's a huge piece of silhouette art, a landscape in profile that includes: a fountain; trees; radio towers; and a - giant flying jellyfish?! That last thing might be what the fellow who isn't looking at a yellow warbler sees.

There are also very deep wells, or mine shafts, or something. Those leads to things like thatch-roofed booths, a pyramid, and what might be one of Cthulhu's drinking buddies. Or maybe it's a snake plant that got out of hand.

If you decide to explore this not-so-little world, the Lemming suggests that you set aside at least 15 or 20 minutes. There a lot of detail there. Also gags, visual and otherwise. Some of the humor is dark.