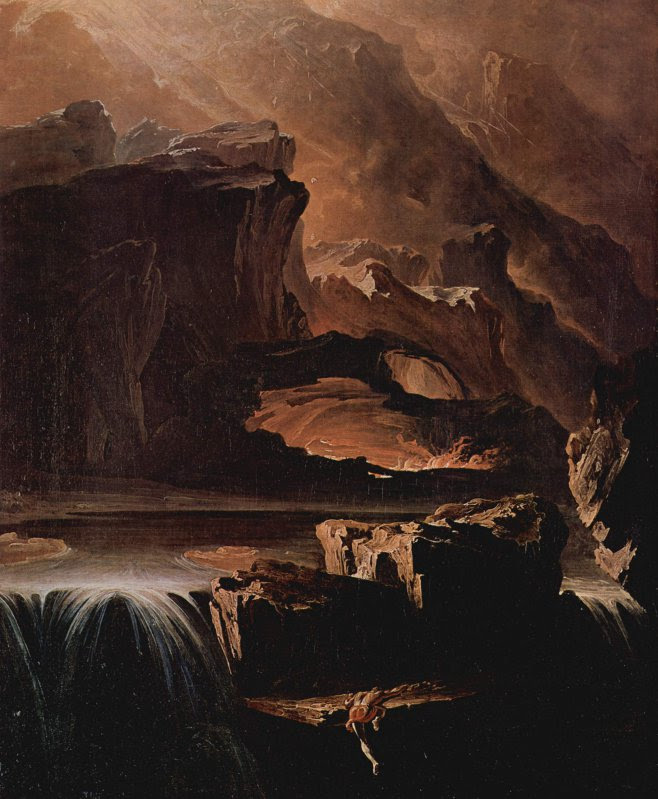 (From John Martin, via Wikimedia Commons, used w/o permission.)
(John Martin's "Sadak in Search of the Waters of Oblivion." (1812))

"And you thought you had a rough day."

And here's food for thought: who, or possibly what, lives in those houses tucked into the mountainside?

More stuff the Lemming calls art, in case you're interested:

The Great Moon Hoax, Dihydrogen Monoxide, and a Rambling Lemming 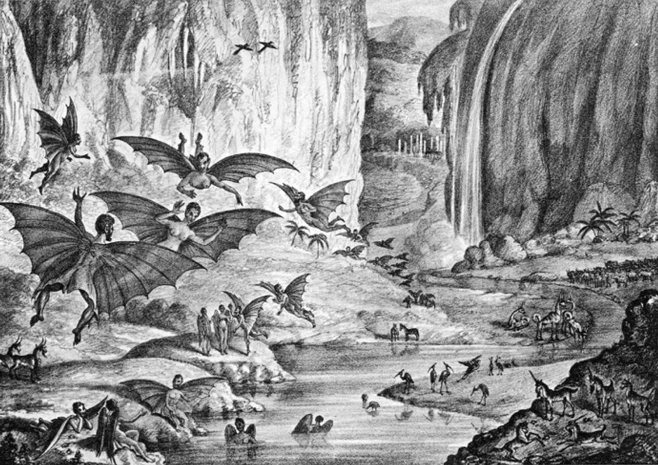 (From The Sun, via Wikimedia Commons, used w/o permission.)
(Lithograph of the "ruby amphitheater:" part of The Sun's coverage of Sir John Herschel's (alleged) observations of moon people. (August 28, 1835))

Sir John Herschel didn't actually observe bison, goats, unicorns, bipedal tail-less beavers and bat-winged people on the moon: but that's what folks reading The Sun saw in 1835. The Lemming isn't surprised that some of them believed the Great Moon Hoax.

Antoine Lavoisier, Joseph Louis Proust, and John Dalton had been laying the groundwork for atomic theory Georg Ohm was bringing the world closer to spin dryers and rolling blackouts; and János Bolyai and Nikolai Ivanovich Lobachevsky released non-Euclidean geometry on an unsuspecting world.

Folks who didn't know much about science or mathematics may have been ready to believe just about anything written about scientists. Don't laugh: 43 out of 50 folks signed a petition to ban dihydrogen monoxide not all that long ago.

Then there's the story about the moon being made of green cheese, and that's not quite another topic.

Space Aliens and a Nearly-Blind Octopus 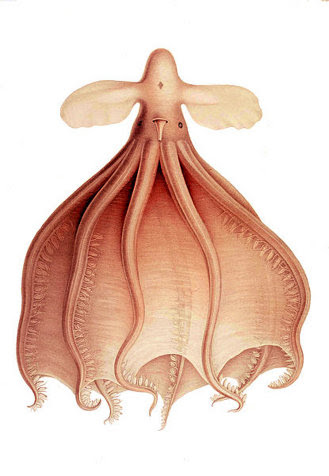 Humans still haven't learned whether or not they're alone in the universe, but those overclocked primates are getting closer to an answer every year.

Guesses, educated and otherwise, keep popping up about why humans haven't found their neighbors, and what they'd look like: the space aliens, that is. Humans know what they look like: or should.

That critter isn't from another planet, by the way. It's a drawing of Cirrothauma murrayi, a sort of finned octopus.

Another name for Cirrothauma et cetera is The blind cirrate. That's cirrate, not curate: they're not British, you know. They really are blind, or nearly so: the octopuses, not British curates.

The octopuses — or is it octopi? — don't have much of a retina, and their eyes aren't equipped with lenses. A chap named Chun, Carl Chun, described the species in 1911.

Some humans say that they have so been visited by space aliens: lots of times. Maybe so, but the Lemming wonders if anybody could get bored enough to bother the natives with such remarkable regularity.

On the other hand, assigned to some back-side-of-nowhere maintenance station for an extended tour of duty? Maybe borrowing a short-range vehicle and buzzing cars - - - and that's definitely another topic.

Chronic Tinnitus and the Amygdala — or — When Your Ears Ring: Should You Answer? 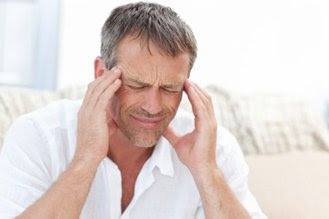 "People with persistent ringing in their ears — a condition called tinnitus — may process emotions in the brain differently from people who do not have the condition, according to a new study.

"Using fMRI scans, researchers looked at people's brain activity while the patients listened to pleasant, unpleasant and neutral sounds. The study included people with tinnitus, people who had hearing loss but not tinnitus and people with normal hearing.

"The investigators found that when they played the pleasant and the unpleasant sounds, the amygdala, a brain region associated with processing emotions, had less activity in the tinnitus and hearing-loss patients than in people with normal hearing. When researchers played the pleasant sounds, tinnitus patients had more activity than people without tinnitus in two other brain regions associated with emotion, the parahippocampus and the insula.

" 'The amygdala isn't the only player,' when it comes to processing emotional sounds in people with tinnitus, study researcher Fatima Husain, a professor at University of Illinois at Urbana-Champaign, told Live Science...."

These researchers apparently haven't found that folks with chronic tinnitus experience different emotions: just that their amygdala shares the workload with the parahippocampus and the insula.

More than You Need to Know About Bits of the Brain

That's a busy little bit of brain. Small wonder that humans with constantly ringing ears have some of the 'how do I feel about this sound' work farmed out to other processing centers. Otherwise they might have trouble remembering stuff like why they went to the grocery, or when the wife's birthday is.

Not that husbands are renowned for remembering birthdays, anniversaries, or grocery lists: which is a little odd, since adult male humans and rats have bigger amygdalas than their female counterparts; or is that amygdali; which reminds the Lemming of Salvador Dali, which is another topic. 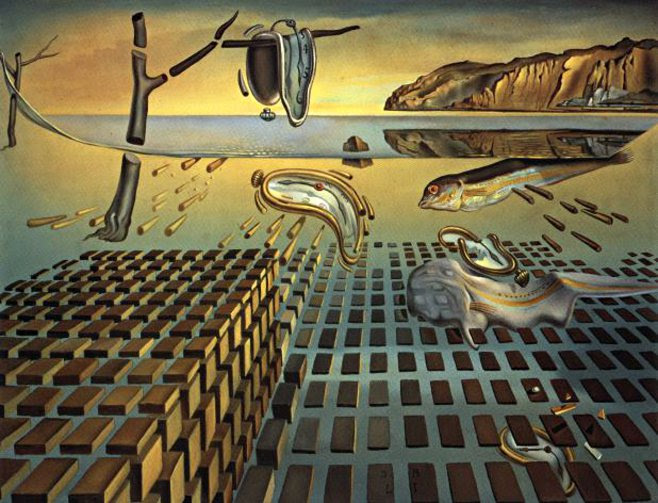 (From Salvador Dalí; via Salvador Dalí Museum, St. Petersburg, Florida and Wikipedia; used w/o permission.)
(The Chromosome of a Highly-coloured Fish's Eye Starting the Harmonious Disintegration of the Persistence of Memory.)

Gone for the Weekend 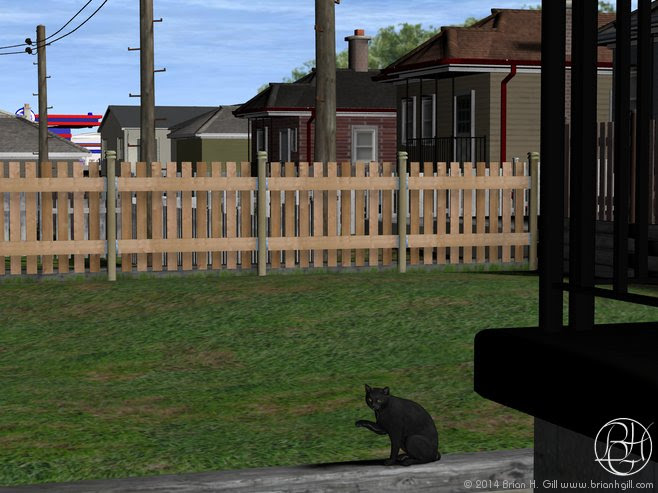 It was a near-perfect morning when the Lemming arrived at 1005 Boxelder Drive. Photo ops were limited, however, as everyone except the cat was gone for the weekend.