"Official" is one thing. "officious" is something else. Some folks are officials, but not officious. Others are officious but not in an official capacity.

Some folks look forward to Friday because the next day they'll be away from the officious official who runs the office: for two days, anyway.

That brings the Lemming to the word panjandrum. That's:
And now, for those whose life would not be complete without reading it:
Here's the 1820 version:


"So she went into the garden to cut a cabbage leaf, to make an apple pie ; and at the same time a great she-bear coming up the street, pops its head into the shop. 'What! no soap?' So he died, and she very imprudently married the barber; and there were present the Picninnies, and the Joblillies, and the Garyulies, and the grand Panjandrum himself, with the little round button at top; and they all fell to playing the game of catch as catch can, till the gunpowder ran out at the heels of their boots."
(Samuel Foote, via Maria Edgeworth)

No Google Reader After June, But RSS Goes On

"How to Keep Following eagereyes After the End of Google Reader"
Robert Kosara, Blog, eagereyes (April 7, 2013)

"With Google Reader shutting down July 1st, now is the time to find alternative ways to follow your favorite blogs. For this one, you can now get new postings on Facebook and through a dedicated Twitter feed, in addition to the RSS feed. See below for some RSS aggregator/reader alternatives to Google Reader.

"I don't use Facebook and Twitter to follow feeds, that's what I have my RSS reader for. But for people who like doing that, perhaps using Flipboard or similar, I have now created pure feed accounts. No talking, just links to new postings...."

The Google Reader has been a pretty good service, one the Lemming used occasionally. But as Robert Kosara points out, it's not the only way to keep track of blogs.

An important point is that RSS will still be around. Depending on who's talking, RSS stands for Rich Site Summary or Really Simple Syndication. It's a way to publish frequently-updated online content in a more-or-less standardized format. Google Reader used RSS, but it's far from the only RSS reader around.

In a way, today's situation reminds the Lemming of the days when America Online (AOL) was doing a good job of marketing its online community. Some folks seemed to think that AOL and the Internet were pretty much the same thing, and that's another topic.

"The blasts were likely detonated by timers -- not by cell phones, a law enforcement official said.

"The U.S. government has warned federal agencies in the past that pressure cookers -- air-tight pots used to quickly cook or preserve foods -- have been turned into bombs in parts of the world. A Department of Homeland Security memo called it 'a technique commonly taught in Afghan terrorist training camps.'..."

The Lemming is not at all happy about what happened at about 2:50 p.m. Monday in Boston. Three people were killed when bombs exploded. That was a tragedy. Other folks survived, but are now missing limbs. That's far from good news.

Tuesday's news includes a few new details. It looks like pressure cookers and timers were used to make the bombs.

We still don't know who was responsible. Whoever decided to cause death, suffering, and destruction, was probably motivated at by hate: at least in part. That, in the Lemming's considered opinion, is a bad thing.

"While Strolling Through the Park One Day - - -"

This tune skittered through the Lemming's mind while watching a video:

While strolling through the park one day
In the merry merry month of May
I was taken by surprise
By a pair of roguish eyes
In a moment my poor heart was stole away.

And now, a fellow singing the tune: in four part harmony: 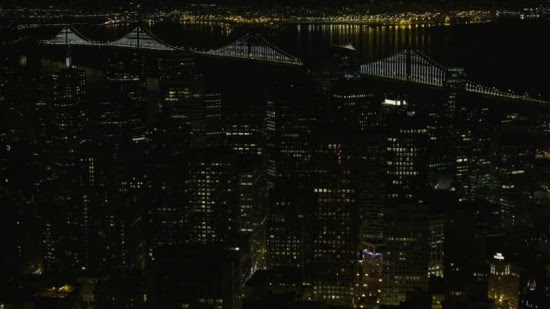 "The Golden Gate Bridge has long overshadowed its grayer, plainer companion, the San Francisco-Oakland Bay Bridge. That's changed, just a bit, now that the Bay Lights illuminate 'the other bridge' with the glow of 25,000 glittering LEDs.

"We've been lucky enough to see them each night since they first lit up March 5, and now you can enjoy them too - in stunning 4K definition.

"The video was shot with a RED Epic attached to Gyro-Stabilized Systems' C520, a portable five-axis gyro-stabilized camera platform. It's the first such system that is fully upgradable, interchangeable, and can accommodate 4K camera tech...."

It's a pretty cool photo. The copy in this post was cropped to fit the Lemming's format.

What's really impressive is what it took to get the video: for that you'll have to read the Wired article.

Normally, the Lemming would ramble on about LEDs, San Francisco, or maybe bridges. It's been one of those weeks, though, and the Lemming's taking a break.