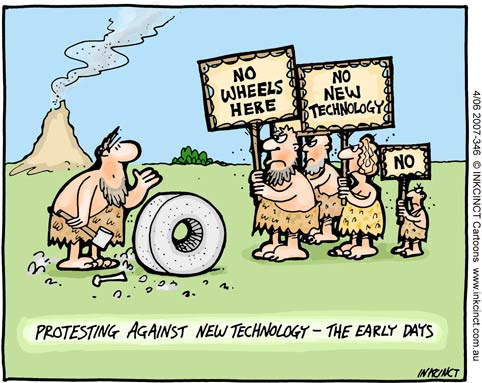 (from INKCINCT Cartoons, used w/o permission)

I very seldom copy an entire post in this blog, but trying to describe this cartoon would have robbed you of its impact, I think.

This cartoon appears on the INKCINCT Cartoons, Australia, website.

I think it's funny: and a reminder that every technology we have is new: from smallpox vaccine to agriculture. And, most new technologies have had their protesters, including smallpox vaccine, and, probably, agriculture. Which, oddly enough, was developed about the same time that smallpox appeared.

I think that learning how to grow crops was worth the risk, though. But then, I'm one of those people who think that using fire and string is a good idea.
Posted by Brian H. Gill at 5:48 PM