"[Note: Last week we saw some interesting speculation that Atlantis had been found in Google Earth. As much as we'd love for that to be the case, there is a scientific explanation for the odd markings found on the seafloor. We've invited two of the scientists who gathered the data that appears in Google Earth to answer some questions that came up. - Ed.]

"Since the launch of Ocean in Google Earth, millions of people have started to explore the ocean, and many have been surprised by their discoveries...."

This is the image that got in the news last week: 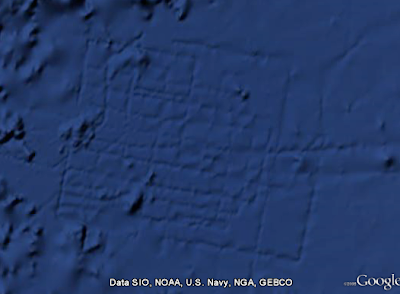 (from the Official Google Blog, used w/o permission)

The idea that it's Atlantis is what was in the articles I saw. Google reports that farms run by space aliens was another explanation.

Turns out, those odd marks are artificial after all. They're called "ship tracks." What we're looking at are marks left in the mapping data, showing where the mapping ships went.

Google goes into more detail about it.

Of course, space aliens still might be involved: or Elvis. Somehow, though, I doubt it.
Posted by Brian H. Gill at 3:47 AM