Volcanoes, a Governor, Science, and the Next Yellowstone Caldera Blowout

"The $140 million to which Jindal referred is actually for a number of projects conducted by the United States Geological Survey, including volcano monitoring. This monitoring is aimed at helping geologists understand the inner workings of volcanoes as well as providing warnings of impending eruptions, in the United States and in active areas around the world where U.S. military bases are located...."

Perhaps I shouldn't criticize Louisiana's governor. To the best of my knowledge, that state has no active volcanoes, ashfall from the last Yellowstone eruption only covered part of the northwest corner of Louisiana: and that was about 630,000 years ago. Governor Jindal is likely to be out of office before the caldera in Colorado erupts again.

Even so, volcano monitoring does benefit Louisiana - indirectly. Sooner or later, America will experience something like the Mt. St. Helens eruption. Remember having to put up with this sort of thing?

Mt. St. Helens: It Could Have Been Worse

Over in the Mediterranean, there was that Vesuvius eruption that buried Herculaneum and Pompeii, about two thousand years ago. If you think there was a fuss about Katrina, imagine what Congress would be saying about that, if it happened in today's America.

Mt. St. Helens and Pompeii: It Could Have Been a Lot Worse

Somewhere in the neighborhood of 630,000 years ago, in what's now the northwest corner of the American state of Wyoming, a volcano erupted. These days, the caldera has Earth's largest concentration of geysers. We call it Yellowstone Park.

That 630,000 BP eruption put about 1,000 cubic kilometers of ash in the air. That's about 240 cubic miles. Ash settled over quite a lot of what's now the United States of America. 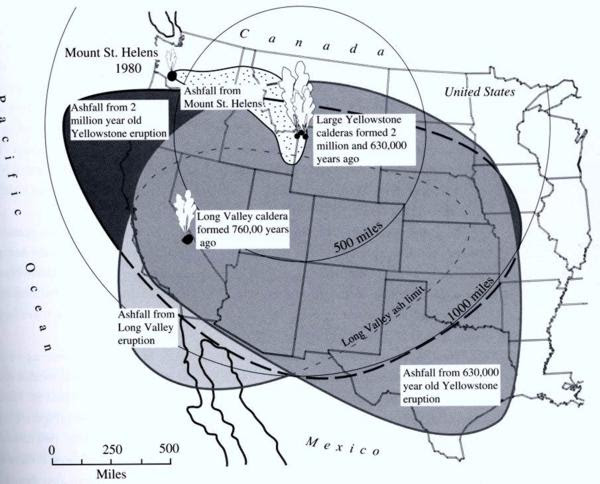 (from Smith and Siegel, via "The Yellowstone Hotspot by Kim Smurlo (Spring 2004), used w/o permission)

That map shows what happened after the last few major eruptions over the Yellowstone hotspot, with Mt. St. Helens' recent hiccup included for comparison.

Even if we had learned enough, at this point, to know exactly when Yellowstone is going to erupt again, I rather doubt that we could evacuate the western two thirds of the North American continent in time. On the bright side, the odds are that we have several tens of thousands of years to get ready.

The last three big Yellowstone eruptions happened at roughly even intervals. Assuming that the next one goes off 'on schedule,' it's coming any time now: geologically speaking. I made that little timeline to plot the intervals between eruptions. Making quite a few assumptions, we may have around 60,000 years to prepare for the next big one. (Assumptions aren't all that reliable - see "Dr. Li's Cupola Formula, the Bond Market, and Wall Street's Meltdown" (February 24, 2009))

By that time, our descendants may be able to dissipate the caldera's energy harmlessly - or may already have tapped out that particular geothermal energy source. If not, well, there's not much I can do about right now.

For that matter, if I feel the floor shake in the next few minutes, and notice that internet connectivity is gone for points west, and lousy for everything else - there's not much I can do about that, either. 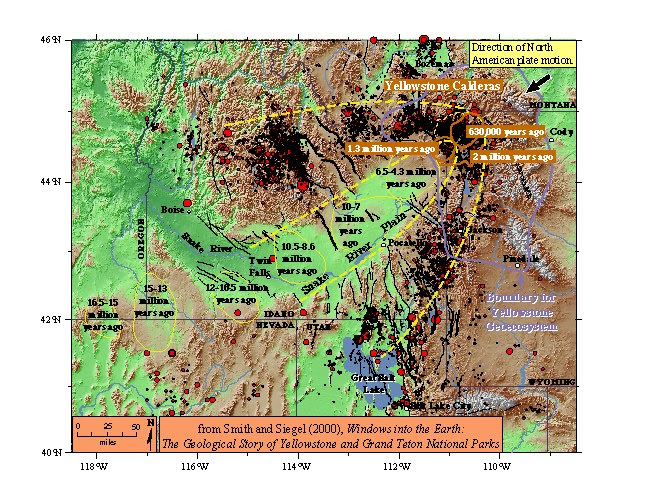 (from Smith, used w/o permission)
(see "Windows into the Earth: The Geologic Story of Yellowstone and Grand Teton National Parks" Robert B. Smith, Lee J. Siegel (2000) (available at amazon.com and elsewhere))

About 75,000 years ago, or maybe 71,000 years back, Mt. Toba in Sumatra blew its top. Roughly 800 cubic kilometres (or, a bit shy of 200 cubic miles) of volcanic ash drifted northwest. Quite a lot fell on the Indian subcontinent: six inches to twenty feet deep. That's from about 15 centimeters, to just over six meters, of ash. There were people living there, before the eruption: but not after.

On the light side, a one-panel cartoon:
"Volcano Preparedness Tips"
One Panel Comix (February 27, 2009)

Actually, it's "Bobby Jindal's Volcano Preparedness Tips" - my favorite, right now, is #3: "Pick a good pose! In 2000 years when archeologists...."

Who is the moron that wrote this article? If you are going to write an article about the volcanic activity in Yellowstone, you should at least know that it is the NW corner of WYOMING...not Colorado. It makes you look stupid!

My name, as noted in the sidebar, is Brian Gill. I'm the "moron" who wrote this article.

I agree, essentially, with an underlying premise of your observation: Factual errors are not suitable for posts, or articles if you will, of this sort. For that reason I have corrected the error.