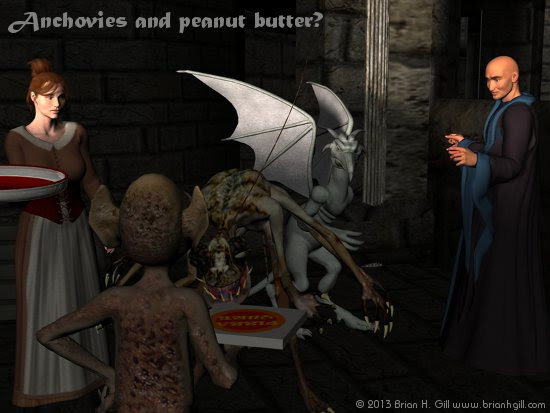 Labels: food, from the mind of the Lemming, Halloween, holidays, humor 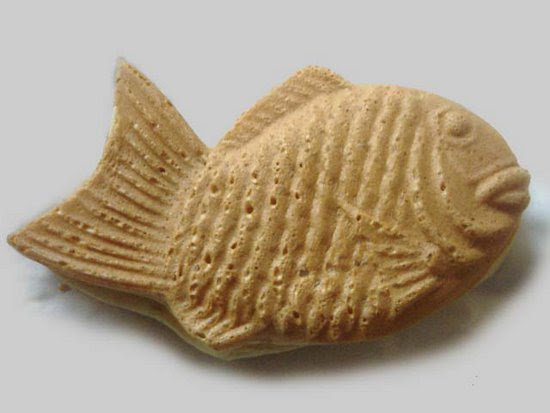 "Taiyaki (鯛焼き , literally "baked sea bream"?) is a Japanese fish-shaped cake. The most common filling is red bean paste that is made from sweetened azuki beans. Other common fillings may be custard, chocolate, cheese, or sweet potato. Some shops even sell taiyaki with okonomiyaki, gyoza filling, or a sausage inside...." 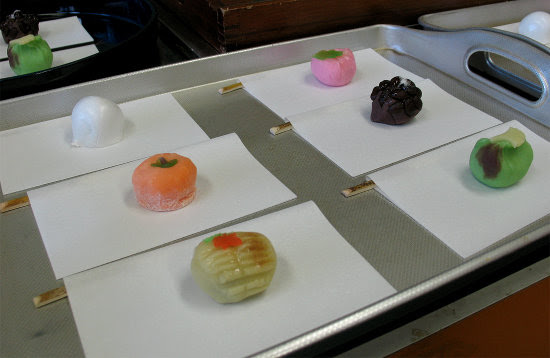 "Wagashi (和菓子 wa-gashi?) is a traditional Japanese confectionery which is often served with tea, especially the types made of mochi, azuki bean paste, and fruits. Wagashi is typically made from plant ingredients...."

On the other hand, there's something to be said for folks who can bake bean paste, call it "baked sea bream:" and get others to pay for the privilege of eating it.

Then there's bean paste that's shaped like a variety of fruits.

Which brings up an interesting point: does anyone eat fish-shaped baked bean paste stuffed with chocolate and cheese? If so: why? 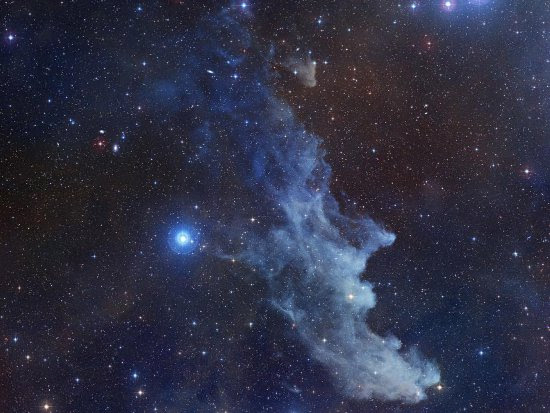 "As the name implies, this reflection nebula associated with the star Rigel looks suspiciously like a fairytale crone. Formally known as IC 2118 in the constellation Orion, the Witch Head Nebula glows primarily by light reflected from the star. The color of this very blue nebula is caused not only by blue color of its star, but also because the dust grains reflect blue light more efficiently than red. A similar physical process causes Earth's daytime sky to appear blue."

The Witch Head Nebula is either left over from a supernova, or not. Either way, from Earth's angle it looks like the ethically-challenged stepmother in Snow White or Hansel and Gretel, sort of. Some of those tales are downright Grimm.

The way light gets scattered by tiny particles is why Earth's sky and the Witch Head Nebula look blue. It's called Rayleigh scattering, not to be confused with the Raleigh Bicycle Company, Sir Walter Raleigh, or Sir Walter Scott.

Sorry about that. The Lemming's catching up on sleep, or fighting a cold, or in a puckish mood. Oddly, "pawkish" isn't in dictionaries, although the Lemming's seen and heard it used. Definitions aboud for gawkish, hawkish, mawkish, peckish, perkish, rakish, and the aforementioned puckish: but nary a peep about "pawkish."

Somewhere in Earth's sky there must be a nebula that looks like Little Bo Peep or her sheep, and that's another topic.

"Hubble Celebrates Its Seventeenth Birthday with the Birth of a Star

"...one of the largest panoramic images ever taken with Hubble's cameras. It is a 50-light-year-wide view of the central region of the Carina Nebula where a maelstrom of star birth - and death - is taking place....

"...The immense nebula contains at least a dozen brilliant stars that are roughly estimated to be at least 50 to 100 times the mass of our Sun. The most unique and opulent inhabitant is the star Eta Carinae, at far left. Eta Carinae is in the final stages of its brief and eruptive lifespan, as evidenced by two billowing lobes of gas and dust that presage its upcoming explosion as a titanic supernova.

"The fireworks in the Carina region started three million years ago when the nebula's first generation of newborn stars condensed and ignited in the middle of a huge cloud of cold molecular hydrogen. Radiation from these stars carved out an expanding bubble of hot gas. The island-like clumps of dark clouds scattered across the nebula are nodules of dust and gas that are resisting being eaten away by photoionization...."
NASA (March 24, 2007)

Like most other things in the sky, the Carina Nebula has quite a few names and catalog numbers. Depending on who's writing, it's Caldwell 92; or the Eta Carinae Nebula, Grand Nebula, Great Nebula in Carina; or NGC 3372.

A nebula by any other name wouldn't smell as sweet, and the Lemming is not going to go into a Shakespearean frenzy.

Points of interest in the Carina Nebula include the Homunculus Nebula. There we go with a Halloween theme again. Sort of.

The word homunculus first showed up in 16th century alchemical records. These drastically undersized human-like critters are sort of related to the mandrake plant, except they don't really exist. That's the Lemming's story, and he's sticking to it.

Mystic Mountain is another scenic spot in the Carina Nebula, and not to be confused with an amusement park in Jamaica, or a ski resort in Pennsylvania. The latter are both on Earth, which may be obvious. Then again, maybe not.

From the Mind of the Lemming: Postcard 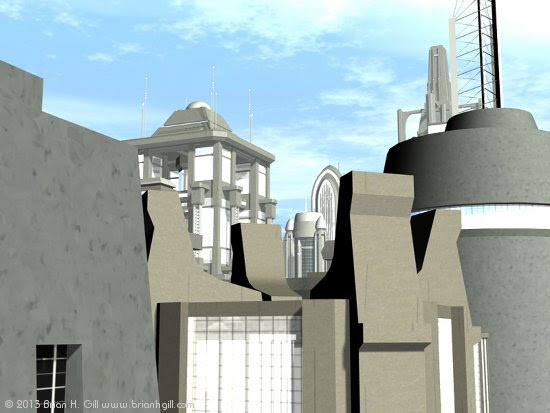 Having a great time. Will be back soon.

Labels: from the mind of the Lemming, science fiction, vacation 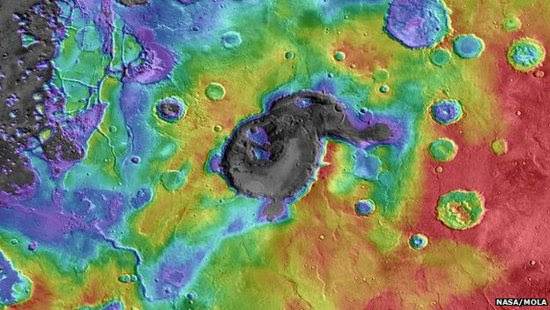 (From NASA/MOLA, via BBC News, used w/o permission.)
"Eden Patera is the best example. The irregular-shaped caldera formed when the ground collapsed into the void. The colours here represent elevation in the surrounding terrain. Red is high; blue is low"

"Mars may have had giant explosive volcanoes in its ancient past that spewed billions upon billions of tonnes of rock and ash into the sky.

"Vast areas of collapsed ground in a region of the planet called Arabia Terra are their likely remains, believe Joe Michalski and Jacob Bleacher....

Scientists kept finding evidence that really big volcanoes erupted when Mars was young, but hadn't found enough to account for all the ancient ash.

Apparently they were looking for the wrong kind of volcano.

(From NASA/JPL/MSSS, via BBC News, used w/o permission.)
"An impact crater (L) is usually circular and surrounded by an apron of ejected material. The collapsed calderas of supervolcanoes (R) look very different, with volcanic features such as terracing and pinched rims"

"...They [Michalski and Bleacher] say such supervolcanoes would have had a profound impact on the early evolution of Mars.

"Their gases would have influenced the make-up of the atmosphere and perturbed the climate. And the ashfall would have covered the landscape across great swathes of the planet. It is quite likely some of the deposits the rovers are now encountering on Mars have their origin in colossal blasts...."
(Jonathan Amos, BBC News)

"Supervolcano" is an unofficial name for volcanoes that blow 1,000 cubic kilometers or more of rock into the air.

One of Earth's better-known supervolcanoes is the one that's powering Yellowstone Park's hot springs and geysers. That one probably has one more eruption coming. Not to worry, though. If the Yellowstone caldera's past eruptions are a guide, humanity probably has another 60,000 years to get ready: more or less.

The Yellowstone caldera doesn't look like a volcano, and neither do the Martian supervolcanoes. Olympus Mons was easy to spot: it's a huge mound with craters on top. What Michalski and Bleacher found look a little like irregular impact craters.

Part of what's different about the possible supervolcanoes on Mars is that, unlike craters left by impacts, they're deep.

If Michalski and Bleacher are right, scientists have part of the explanation for how parts of Mars got covered with so much ash. Understanding how Mars got to be the way it is should help settlers, when humanity gets around to moving outward, and that's another topic.