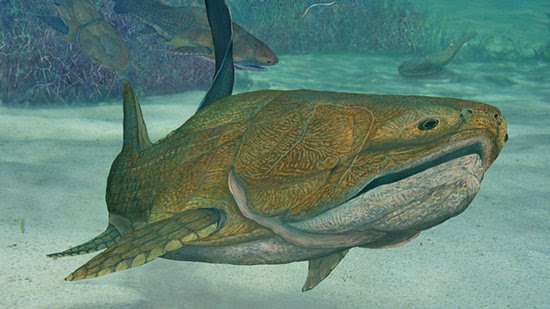 "The earliest known species with what we would recognize as a face was an armored, beady-eyed prehistoric fish."

"The earliest known species with what we would recognize as a face was an armored, beady-eyed prehistoric fish, according to a new paper in the journal Nature.

"The fish, entelognathus primordialis (meaning 'primordial complete jaw'), is the oldest known animal to have face-forming jaw and cheek bones comparable to those of today's bony fishes and most terrestrial animals, including us....

"...'Entelognathus had a rather unprepossessing face,' co-author Per Erik Ahlberg of Uppsala University told Discovery News. 'The mouth was wide, the forehead low and flat, and the small, close-set and almost immobile eyes pointed forwards like a pair of car headlights.'..."

The Lemming isn't sure that "primitive" is quite the right term for this piscine prodigy. That jaw was a revolutionary development in fish: and still standard equipment in most land animals that keep their skeleton on the inside. Which is dandy place for it, in the Lemming's opinion.

Sharks definitely aren't primitive, as Friedman points out in the article. Matt Friedman: the Lemming gathers that he does lectures about paleobiology at Oxford. The university, not the town: although Oxford U. is in Oxford, and that's another topic.

Sure, the skeletons of sharks are cartilage, not bone, but those fish are specialized and represent a fairly recent development. "Recent" is in the eye of the beholder, of course. Or Lemming, in this case.

Lampreys and hag-fish: now those things are primitive. Not the current ones so much, but their equally-jawless predecessors back in the good old days when agnatha shared the world with critters that give new meaning to the word "weird." 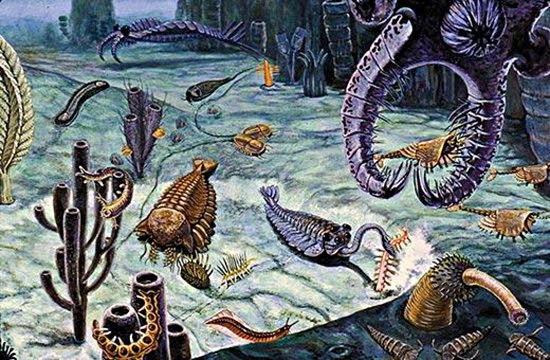 (D.W. Miller, via the Smithsonian Institution, used w/o permission.)

Of course, if opabinia had kept going for another 500,000,000 years or so, they might be complaining about the younger generation and cost of living: and think critters with only two eyes are weird. And that's another topic. Topics.

Opabina? That's the little critter with five eyes and an improbable-looking mouth-claw-pincer thing sticking out of its front end in that picture. 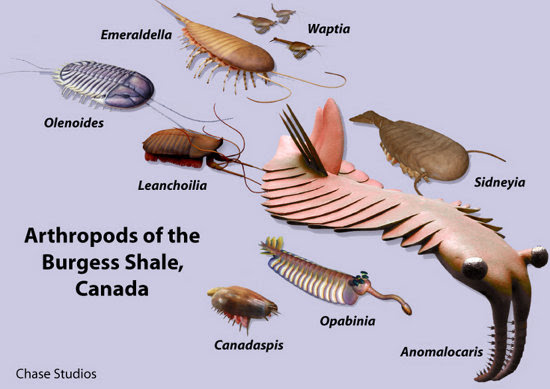 (From Chase Studios, via Sam Noble Museum, University of Oklahoma, used w/o permission.)
Posted by Brian H. Gill at 8:00 AM No comments:

From the Mind of the Lemming: Amateur Night 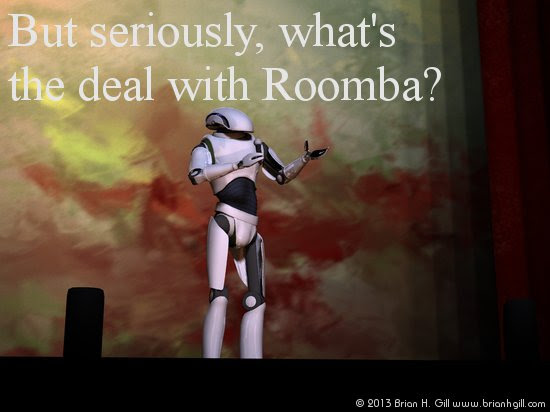 The Lemming didn't think it was all that funny, either.

You'll find more than you may want to know about Roomba® at www.irobot.com.

Labels: from the mind of the Lemming, humor, robots, science fiction

Friday the 13th, Poetry, and a Rambling Lemming

First, a public service announcement. Thursday, September 19, is Talk Like a Pirate Day. Ye have been warned! Arrr!

Not that it really matters, except for people prone to paraskevidekatriaphobia, which doesn't have much to do with parasails, although finding two Friday Special sales would be nice.

The Lemming doesn't have a parrot, either, or a parasail. This post was supposed to be about something besides Friday the 13th and fearful feelings, which the Lemming does occasionally have: but not about Friday the - - - oh, never mind.

Now, for no particular reason, here's a set of snippets. The Lemming likes this sort of thing. Your experience may vary.

"...And all who heard should see them there,
And all should cry, Beware! Beware!
His flashing eyes, his floating hair!
Weave a circle round him thrice,
And close your eyes with holy dread,
For he on honey-dew hath fed
And drunk the milk of Paradise."
(Coleridge)

"...Till day rose; then under an orange sky
The hills had new places, and wind wielded
Blade-light, luminous black and emerald,
Flexing like the lens of a mad eye...."
(Hughes)

"...'And on the pedestal these words appear:
"My name is Ozymandias, King of Kings:
Look on my works, ye mighty, and despair!"
Nothing beside remains. Round the decay
Of that colossal wreck, boundless and bare,
The lone and level sands stretch far away'."
(Shelley)

How, the Lemming asks, could one ponder "many a quaint and curious volume of forgotten lore?" If the lore is in a volume, it's been set in writing: and can hardly be called "forgotten." Someone might forget where the book is, or how to get to the library, and folks have lost their library cards on occasion: and that's another topic, sort of.

That line is from Poe's cheerful ditty that starts with:

"Once upon a midnight dreary, while I pondered, weak and weary,
Over many a quaint and curious volume of forgotten lore, -
While I nodded, nearly napping, suddenly there came a tapping,
As of some one gently rapping, rapping at my chamber door...."

"Cheerful?" What was the Lemming thinking? Never mind.

The Lemming can understand why a person with a propensity for abstruse pursuits might ponder ponderous volumes. That's how some of these posts get started.

A particularly polite person might answer a nocturnal tapping on the door. But when tapping came at the window: What was he thinking?!

The chap must have been particularly lonely. Or something.

For some reason, the Lemming has exhibited a propensity for words beginning with "p:" and that's yet another topic.

Time to stop. The Lemming is pooped from all that pondering. 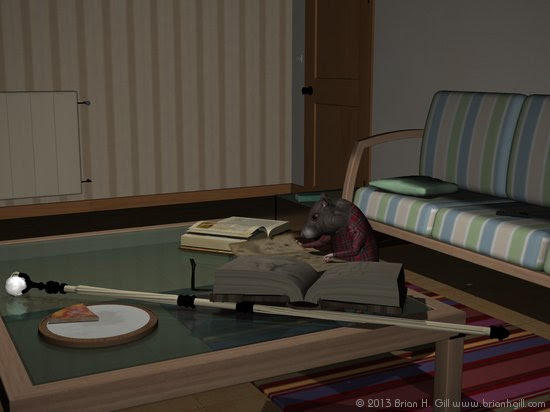 From the Mind of the Lemming: Guest Speaker 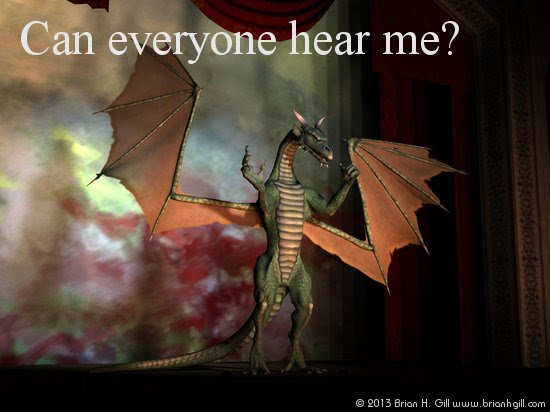 The Lemming's mind wandered this week, and dropped in at a conference somewhere.