"Imagine being trapped in your own body, aware of what's going on around you but unable to move or even speak.

"Thanks to a modern technological innovation known as a neural interface — a direct link between the human brain and a computer — there may be hope for sufferers of what's commonly known as 'locked-in syndrome.' " 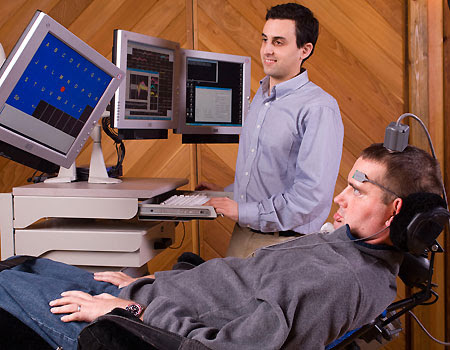 "As portrayed in the 2007 movie 'The Diving Bell and the Butterfly,' locked-in patients are conscious, but fully paralyzed except for their eyes. ..."

This is very much an emerging technology: so far, it takes about a day for the information processing system to sort out vowels from the patient's speech center. But researchers and doctors are hoping to have the man who had a brain-stem stroke 'speaking' vowels in about a year.
Posted by Brian H. Gill at 5:25 PM