Big Billboard is Watching You?

Billboards with smart cameras are helping startup businesses figure out who is interested in the products and services they offer.

(The Lemming starts a rare rant.)

When many people say "privacy" these days, they apparently mean "anonymity." They're one more unit in a faceless mass, and they like it that way.

If they go into a store, they don't want anyone to recognize them, and certainly don't want the clerk to remember what they've ordered before, and which shelves piqued their interest.

If you think that sounds odd, I'll agree. But the response to security cameras and online stores that remember a customer's buying habits, suggest that this is what a great many people want.

I don't. But then, I'm not a typical urbanite. I was born and grew up in Fargo-Moorhead, mostly before the two towns' combined population hit 100,000. The closest I've come to living in a large city is San Francisco (beautiful city, boring climate - that's another story). With fewer than 800,000 people, San Francisco is practically a small town - compared to 'real' cities like Bangkok, Los Angeles, or Tokyo.

Today, I live in a town with about 4,000 other people. It's the sort of place where 'if you don't remember what you did today, ask someone. They'll know.' My father lives in an even smaller town. I got a phone call from one of his neighbors recently, who'd noticed something odd about my father's place, and was concerned.

"Privacy?" In what seems to be the urbanite sense of the word, it doesn't exist here. And, I love it.

About those 'intrusive' billboards: people, get a grip. In my world, billboards are like shop windows. They're there to bring in customers.

And, it would be a brain-dead shopkeeper who didn't pay attention to what sort of people stopped to look at the front window. It really does make a difference: particularly if you're trying to decide where to advertise, and how to present your services or products.

I've wondered if this craze for "privacy" will eventually lead to people walking around with bags over their heads, and capacious gowns to hide their identity. 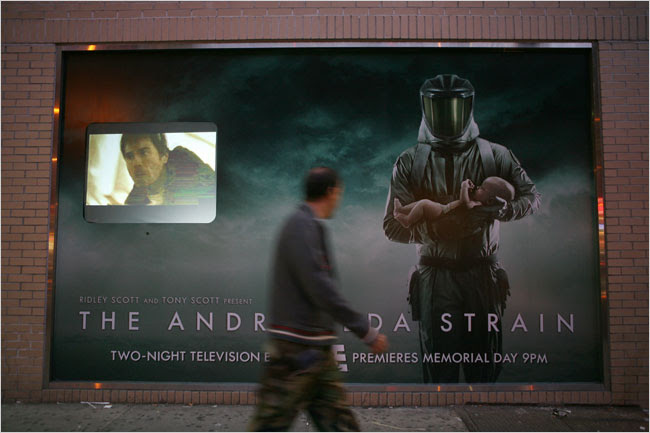 (from The New York Times, used w/o permission)
Person having their privacy violated by intrusive billboard? 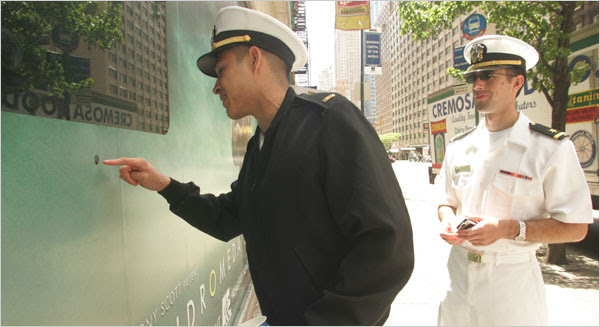 (from The New York Times, used w/o permission)
Military inspection of disturbing billboard.

Here's what got the Lemming started this morning:

"In advertising these days, the brass ring goes to those who can measure everything — how many people see a particular advertisement, when they see it, who they are. All of that is easy on the Internet, and getting easier in television and print.

"Billboards are a different story. For the most part, they are still a relic of old-world media, and the best guesses about viewership numbers come from foot traffic counts or highway reports, neither of which guarantees that the people passing by were really looking at the billboard, or that they were the ones sought out.

"Now, some entrepreneurs have introduced technology to solve that problem. They are equipping billboards with tiny cameras that gather details about passers-by — their gender, approximate age and how long they looked at the billboard. These details are transmitted to a central database.

"Behind the technology are small start-ups that say they are not storing actual images of the passers-by, so privacy should not be a concern. The cameras, they say, use software to determine that a person is standing in front of a billboard, then analyze facial features (like cheekbone height and the distance between the nose and the chin) to judge the person’s gender and age. So far the companies are not using race as a parameter, but they say that they can and will soon...."

" 'I didn’t see that at all, to be honest,' said Sam Cocks, a 26-year-old lawyer, when the camera was pointed out to him by a reporter. 'That’s disturbing. I would say it’s arguably an invasion of one’s privacy.'

"Organized privacy groups agree, though so far the practice of monitoring billboards is too new and minimal to have drawn much opposition. But the placement of surreptitious cameras in public places has been a flashpoint in London, where cameras are used to look for terrorists, as well as in Lower Manhattan, where there is a similar initiative...."
Posted by Brian H. Gill at 8:40 AM