By now, folks living and working in New York City have probably found most of the body parts that sprayed over Manhattan's south side on the morning of September 11, 2001. That hole in the Pentagon has been repaired, and a memorial is being built where the passengers and crew of Flight 93 died while trying to stop another airliner from hitting its target.

And, back in Manhattan, construction is in progress on New York City's Word Trade Center - version 2.0"World Trade Center rising from the ashes of Ground Zero"
BBC (September 10, 2010)

"As ceremonies take place around the world to remember victims of the 9/11 attacks, around 2,000 workers are building a huge development at Ground Zero in New York.

"Six skycrapers, a museum, two massive waterfalls where the twin towers once stood, a performance centre and a rail terminal are gradually taking shape nine years after the attacks.

"Work at the 17-acre site has been delayed by disputes over whether the essence of the buildings should be commercial or commemorative. Finally there has been a compromise, with a mix of both retail, office and memorial space known as One World Trade Center...." 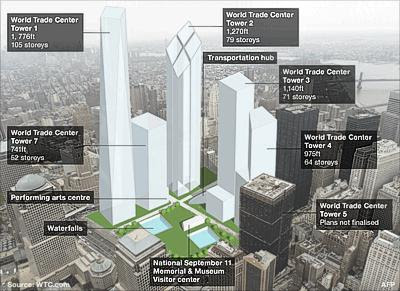 (AFP, via BBC, used w/o permission)

The Lemming thinks that an all-commercial World Trade Center Version 2.0 would, in its own way, be quite "commemorative:" in a sort of 'we're ba-ack' sense. On the other hand, there's something to be said for that museum and the striking symbolism of those two square voids.Here's what the area looked like, after the attack:

"From the 38th floor at 7 World Trade Center, Larry Silverstein peers down on a flurry of activity below at Ground Zero. The sound of jackhammers and 'beep, beep' of cement trucks filters into his corner office.

"No superlative, expressed in his thick New York accent, appears to suffice. 'Remarkable,' 'grand,' 'extraordinary,' 'spectacular,' 'tremendous,' 'phenomenal': Mr. Silverstein, the real estate developer who signed the lease on the World Trade Center a few weeks before 9/11 and spent the last nine years fighting to rebuild the site on his terms, uses them all—some more than once.

"On today's anniversary, for the first time, the mood around the rebuilding at Ground Zero is decidedly upbeat. Significant disputes that held everything up for so many years are resolved. Plainly it is no longer just a big, ugly hole in the ground...."

It's a pretty good look at one of the key figures behind getting the rebuilding of New York City's World Trade Center out of the yelling stage and into production.I've written about 9/11 before, in another blog. Including this selection from last year's anniversary:As for what the United States has done, since 9/11: The Lemming is as "apathetic" as ever. I don't feel the proper, conventional, horror and revulsion while contemplating what this country has done:What can I say? I simply don't care - deeply, intensely, irrationally - about the 'right' things.

Election Year Silliness, and Some Guy With a Book to Sell

America's midterm elections are coming in November. Politicians are throwing crazy, inflammatory statements at each other - somewhat in the manner of primate house residents and their fewmets. Sometimes 9/11 and subsequent events are involved in this ritual. This isn't a political blog, so that's as much as the Lemming will say on the topic.

Then there's the dude down in Florida who, as of yesterday afternoon, wasn't going to stage a reenactment of the Opernplatz book-burning. This time with Qurans flambe as the star attraction.

Pastor Jones' actions may not be as crazy at they seem: He has T-shirts and books to sell, and his high-profile bonfire plans gave him the sort of pre-event publicity that money can't buy. Maybe the Lemming is being too cynical.

I've given my views on the planned 'Outreach Center' book-burning in yet another blog:Bottom line: That book-burning was a really bad idea.

Looking for some aphorism of the greeting-card variety, about the 9/11 attack? How about "Evil is Not Nice?"

Seriously? Nine years after Islamic crazies killed themselves and took thousands of other folks with them, the world still has its fools and knaves: along with the occasional homicidal maniac.

Judging from humanity's track record over several thousand years of recorded history, that's not going to change any time soon.

The world also has folks who have demonstrated the ability to observe conditions and events around them - and, if necessary, change their assumptions. Iraq's Awakening Councils are a prime example of this hopeful aspect of human nature. (Another War-on-Terror Blog (January 11, 2008)

Folks who are able to face reality and adapt to what exists will, I think, endure and prosper.

Folks who either can't or won't adapt - will not.

On the whole, I think this view of our options is hopeful.
Posted by Brian H. Gill at 9:45 AM