Over the Moons of Mars

"The sharpest images yet taken by the Mars Express spacecraft of Mars' tiny moon Phobos reveal features as small as 14.5 feet across, the European Space Agency announced March 15.

"Some of the new images taken March 7 during one of several recent close flybys of the moon home in on the proposed landing site for a Russian mission, Phobos-Grunt (meaning Phobos soil), that is expected to touch down on the moon next year.

"During the three flybys on March 7, 10 and 13, researchers measured the moon's tug on Mars Express by examining changes in the frequency of radio signals beamed by the spacecraft to Earth. The frequency shifts indicate that the craft has sped up or slowed down by a few millimeters per second due to the moon's gravity...." 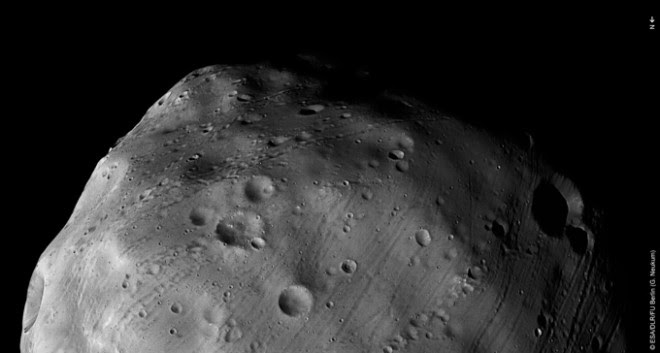 There's still quite a lot about Phobos that we don't know: like whether it's a more-or-less solid chunk of rock, or essentially a pile of gravel held together by gravity.

But we know a bit more now: with more information on its way next year. Assuming that Phobos-Grunt makes a successful touchdown.

A bit of nostalgia: I remember when the assumption was that exploration of the planets would be done by human beings traveling there in spaceships. Sort of like the Apollo missions. Of course, that was before we were making robots.Other posts, about Related posts, at
Posted by Brian H. Gill at 9:00 AM