A Really Weird Fashion Design: and My Take on Yunjin 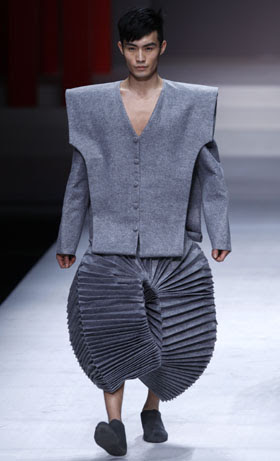 "Hey there, Gorgeous! You come to this bar often?

"I myself make this scene a couple times a week. Gotta spread myself around where the hot chicks are, am I right?

"Yo Joey! My usual! Double Crème de Menthe on the rocks!

"Anyhoo, my name's Cecil. I'm a Leo, I play the ukulele, and I've been to ALL five of the Great Lakes.

Ladies, if this reminds you of that 'date from Hell' - sorry about that.

The last line in the excerpt, "...this outfit? It's IMPORTED. From China....", is for real. That Reuters photo was taken at the "Hempel Award 18th China International Young Fashion Designers Contest during China Fashion Week in Beijing, March 25, 2010."

I don't know who dreamed that up. Or why. Or what, in the name of all that is sane and coherent, the designer had in mind.

Related posts:In fairness, not all fashion designers - well, clothing designers, anyway - are insane. Someone got sobered up long enough to create these distinctly non-hideous garments: 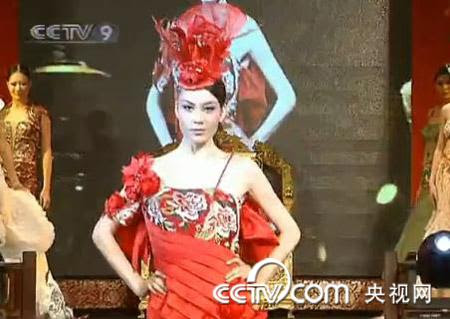 (From CCTV, used w/o permission) 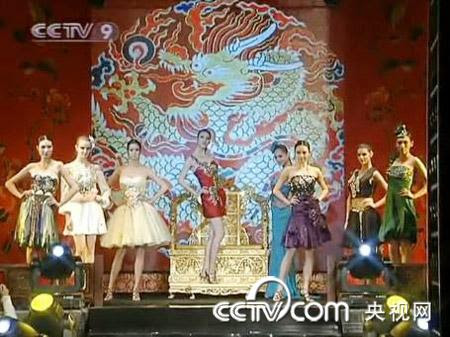 (From CCTV, used w/o permission)

The idea of the project behind those photos was to create a market for 云锦/Yunjin, or cloud brocade. Folks have been making Yunjin for about 15 centuries - but younger artisans have become few and far between. I've written about this before. (January 1, 2010) Bottom line, in my opinion: It's not the biggest crisis in the world, but it would be a shame if there was a break in the Yunjin tradition. And it looks like it would be a bear, trying to re-create the technique.
Posted by Brian H. Gill at 9:08 AM