"A rare set of high-resolution readouts taken directly from the wired-in brains of epileptics has provided an unprecedented look at how the brain processes language.

"Though only a glimpse, it was enough to show that part of the brain’s language center handles multiple tasks, rather than one.

" 'If the same part of the brain does different things at different times, that's a thunderously complex level of organization,' said Ned Sahin, a cognitive scientist at the University of California, San Diego.

"In a study published Thursday in Science, Sahin's team studied a region known as Broca's center, named for French anatomist Paul Pierre Broca who observed that two people with damage to a certain spot in the front of their brains had lost the ability to speak, but could still think. 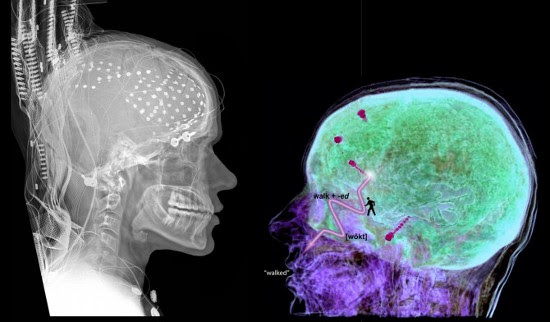 Since then, we've learned a bit more - but just a bit at a time. You see, human beings are the only creatures we know of that speak.
Which limits studies of how the brain processes speech to living human brains.

Igor! Fetch Me a Brain!

That wouldn't be much of an obstacle, if it weren't for the public relations issue doctors in general got, after details of Chancellor Hitler's state-funded medical research became public knowledge.

You've probably never heard of the Nürnberg Code, but it was a sort of grandfather to the notion of "medical ethics" we've got today.

It was, I think, a good idea. As the decades passed, more and more doctors stopped acting as if they were higher beings, beyond good and evil1.

Along the way, some American doctors got caught doing no-nos: And, of course, that very popular method for dealing with troublesome relatives, lobotomies.

"medical ethics" isn't quite the oxymoron it was, back in the good old days when a doctor made me part of his research. And yes: as a former fill-in for lab rats, I'm a trifle biased.

Back to Broca's Center and Speech

"...Speech can't be tested in any life form other than ourselves, and the standard tool for reading the human brain is fMRI, which averages the activity of millions of neurons at set intervals. [and needs really careful interpretation: See "Dead Fish Thinks! - or - fMRI Analytic Methods Need Evaluation" (September 18, 2009).] It's useful for highlighting regions of the brain that are involved in cognitive tasks, but can't detail what's happening inside those areas.

"Sahin's team benefited from a brain-reading technology called intra-cranial electrophysiology, or ICE, in which electrodes are positioned inside the brain itself. It's a medical rather than a research tool, used to precisely measure electrical activity in the brains of epileptics who don't respond to treatment. ICE lets doctors see exactly which parts of a patient's brain may be surgically removed to prevent future seizures...."

These days, ICE is a strictly medical tool. It's much too invasive for use in academic research: even, apparently, if the researchers got informed consent from their subjects.

The article gives a pretty good overview of what Sahin and company found, using a 'viewing' technique that's much more detailed than what's been possible before. As Sahin said, "...'It's fantastic that we cold get so close to the actual neural data. Compared to fMRI, it's like a close-up, high-speed camera where you can see each beat of a hummingbird’s wings, versus taking a picture of the bird flying around a flower.'..."

From the viewpoint of Sahin, in sounds like ICE is cool.