New Look at the Lost Ocean of Barsoom

"More than 3 billion years ago, the northern plains of Mars were covered by a vast ocean that blanketed more than a third of the red planet's surface, new research suggests.

"Previous spacecraft investigations have pointed to possible signs of an ancient ocean on Mars. Still, this idea has been challenged for decades, as past evidence has been uncertain, and the matter remains one of the greatest open questions when it comes to researching the red planet.

"Now scientists have analyzed global databases of river valley networks on Mars, as well as deposits left behind by ancient deltas. Their research suggests 29 deltas they investigated -- more than half of all those in the databases -- sat at roughly the same height some 3.5 billion years ago, apparently ringing a vast ancient ocean shoreline in the northern lowlands of Mars...." 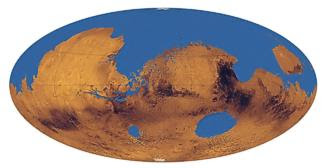 (B. Hynek, via Space.com, used w/o permission)

As more information and analysis adds up, it's looking more and more like that Mars looked a lot like that map - around 3,500,000,000 years ago.

"...'It is surprising how our results are compatible with previous independent studies based on totally different approaches,' [planetary geologist at the University of Colorado at Boulder, Gaetano] Di Achille said. 'Of course, our paper will not say the final word on the debate about the Martian ocean, but we are adding a significant piece to the big puzzle.'..."

There's a whole lot of discussion about where water was on Mars - and even if there was water there, to begin with. Assuming that Mars did have an ocean the size (roughly) of the Atlantic, billions of years ago, there's a big question: what happened to the water?

Which is why robotic Mars missions will - we hope - include tools to collect data that may help answer that question.

Related post:Other posts, about
Posted by Brian H. Gill at 8:06 AM