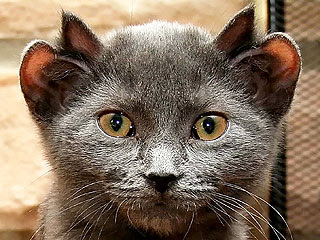 "They say cats have nine lives, but this one has four ears.

"Ted and Valerie Rock first spied the little guy in 2006 at neighborhood bar on the South Side of Chicago before a Bears game. He was the last of a litter of eight put up for adoption by the bar's owner...."

The article doesn't say anything about whether Yoda likes to be scratched behind the ears.

Cats with extra toes are fairly common: this is the first time I've heard of one with extra external ears.
Posted by Brian H. Gill at 3:49 PM

"Ted and Valerie Rock first spied the little guy in 2006 at neighborhood bar on the South Side of Chicago..."

I see there's also no mention if they promptly emptied their drinks into the nearest potted plant before being told that they really were seeing what they thought they were seeing.