"http://www.festo.com/cms/en_corp/9780... - Autonomous flying in a sea of air
"Autonomous flying through a defined air space monitored by ultrasound transmission stations. Agile and easily manoeuvrable with a 3D structure which utilises the Fin Ray Effect® at the front and back." 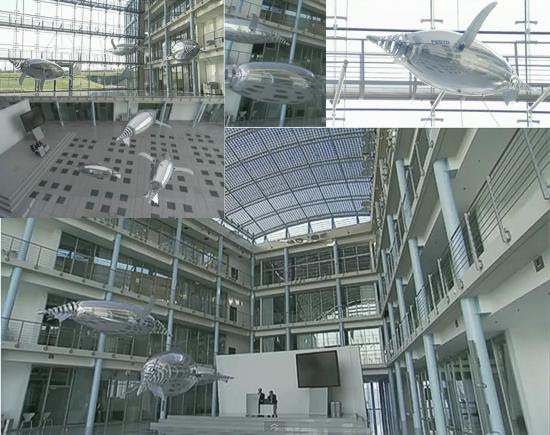 "With the AirPenguins, the engineers from Festo have created artificial penguins and have taught them 'autonomous flight in the sea of air'. For this purpose, control and regulating technology had to be further developed into self-regulating biomechatronic systems, which could also play a future role in adaptive production...."

In other worlds, those are robot flying penguins. There isn't a human operator somewhere, controlling the things. They're flying on their own, making course corrections on the fly. (The Lemming might have avoided that play on words - but decided not to.)

"...A group of three autonomously flying penguins hovers freely through a defined air space that is monitored by ultrasound transmission stations. The penguins are at liberty to move within this space; a microcontroller gives them free will in order to explore it...."

Biomechatronic?! Yes, it's a 'real' word. Now. So is cyborg. Odds are that you're somewhat biomechatronic. Particularly if you've got a pacemaker or use a hearing aid. Interesting times, these.

The Lemming could, at this point, launch into a rant about how technology is robbing us of our humanity, and the robots will be taking over, but it doesn't matter because we all died in the food riots.

With a little editing and lots of emotional flourishes, the result might be taken as very "intelligent" in some circles.

The Lemming's not gonna do that.

For one thing, the Lemming doesn't think that flocks of robot flying penguins will be invading central Minnesota and forcing us to toil in their tinfoil mines.

Besides, there'll be enough fussing, when someone gets the idea of putting a video camera on something like the Festo penguins. With a transmitter, and maybe some a little onboard artificial intelligence, they'd make unintrusive security guards. As it is, some folks have been scared of security cameras in parking lots - and that's another topic.

The Lemming thinks the Festo flying penguins are beautiful, graceful robots - and a far cry from the clumsy, clanking buckets of bolts of old science fiction stories.

Could a technology like this be misused? Of course.

Any technology can be misused. A person can do an amazing amount of damage with a rock. But that doesn't make rocks destructive or dangerous. The problem is the people using tech. Not the tech. In the Lemming's opinion.

My first thought on seeing the things move was 'manatee,' but I see the resemblance to penguins, too.

Wouldn't you know, Germans came up with the things. Well, a German-based company, anyway. Since they have international branches, I suppose the original idea could have come from a different country. Still. Germans. Engineering. It works. It's like finding out that a ridiculously human-looking robot was made in Japan.

I see what you mean, about manatees. The pace at which the robots move is more like manatees that penguins.

About the national character - I think that nations aren't all alike: and mechanical flying robot penguins from Germany - isn't all that surprising.