"How does a unknown dating site, with the absurd intention of destroying Facebook, launch with 250,000 member profiles on the first day?

"At least, that's the approach taken by two provocateurs who launched Lovely-Faces.com this week, with profiles — names, locations and photos — scraped from publicly accessible Facebook pages. The site categorizes these unwitting volunteers into personality types, using a facial recognition algorithm, so you can search for someone in your general area who is 'easy going,' 'smug' or 'sly.'

"Or you can just search on people's real names.

"The duo behind the site say it's art, not commerce.

"In what seems to be liberal-arts-grad-schoolese, Paolo Cirio, a media artist, and Alessandro Ludovico, media critic and editor in chief of Neural magazine, explain why they made the site...."

You'll have to read the Epicenter article, to learn what the (artists?) said.

Back to the article:

"..Cirio and Ludovic say they will take down a user's profile, if a person asks and the site doesn't have any indication they are actually trying to make any money. Instead, it's part of a series of prank sites, the first two of which aimed at Google and Amazon, intended to make people think more about data in the age of internet behemoths...."

Okay: So it's a prank. A sort of joke. The Lemming's willing to believe that. Odds are that it'll do no real harm, apart from giving a few 'privacy' folks conniptions.

On the other hand, someone with - ah, issues - might not realize that Lovely-Faces.com is a sophisticated artistic prank. American 'stalker' laws got passed for a reason - and the Lemming sincerely hopes that doesn't happen to any of the quarter-million folks who got Shanghaied into this little joke. 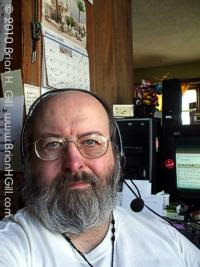 The Lemming isn't too worried about hordes of adoring, lovesick admirers flocking toward the snowbound central Minnesota town the Lemming calls home. That's a photo of the Lemming, taken recently.

It's anyone's guess, what that "facial recognition algorithm" would come up with as a short-phrase character description, given that face. The Lemming put a photo like that in a 'what celebrity do you look like' website once - and Vivian Hsu was in my list of lookalikes. (April 24, 2008) It's the eyes that did it, most likely. Which is an almost entirely different topic.

The Lemming has no plans to see if that pushing-60 fellow made it into Alessandro and Paolo's ersatz dating site. There are more important things on the Lemming's to-do list. Like washing dishes.
Posted by Brian H. Gill at 11:51 PM