"Blog Guy, I know you’re always making fun of bizarre fashion show outfits, but they can’t ALL be that bad. Is it fair for you to only show a designer’s strangest creations?..." 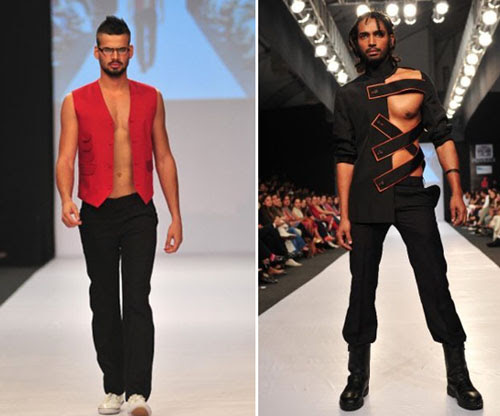 "...Then there is this OTHER thing, sort of a half-shirt with straps. Tayyab tells me it's supposed to represent the hardships of the Pakistani Army in war zones.

"Now, that makes perfect sense to me. If I wore that thing in a war zone - or heck, even to buy a Big Gulp down at my neighborhood 7-Eleven - I guess I'd expect hardships as well...."

You may be too young to remember the fabulous sixties, and the serious seventies, when so many judged so much by how "relevant" it was. If you are, consider yourself greatly blessed.

I was there, when classes in Frisbee throwing were "relevant," and studying history wasn't. I got out with most of my neurons intact - and am glad of it.

But it seems like "relevance," like Dracula, keeps coming back. As Mr. Zondy said, "What in the name of a fitful Welsh rarebit fiend nightmare" was this fashion designer thinking? Granted, armies in war zones are - almost by definition - experiencing hardships.

The impression I get, looking at that weird getup, is that some poor soul stayed up 'way too late, watching a "Star Trek" and "Star Trek: The Next Generation" marathon, and slapped it together sometime after third round of beer and Twinkies.

Not-at-all related post: After a little digging, I found that "The Dream of a Welsh Rarebit Fiend" is (apparently) the title of a 1906 Edward S. Porter film.
Posted by Brian H. Gill at 8:48 AM