"The discovery has forced a rethink of conditions that existed more than 500 million years ago.

"The discovery of blocks of gravel which sank to the bottom of the sea trapped in ancient icebergs has sparked a new understanding of a bizarre group of creatures.

"The research, published in the Australian Journal of Earth Sciences, has also forced a rethink of the conditions that existed more than 500 million years ago.

"Associate Professor Victor Gostin and colleagues at the University of Adelaide found evidence of ancient icebergs mixed in with volcanic rocks which were spewed out when an asteroid hit the earth between 635-542 million years ago...."

Here's the deal: we knew that Earth was an icy place after that asteroid hit; but the assumption had been that the glaciation had been a result of the impact.

Back to that article:

"Gostin, who first discovered rocky traces of the asteroid 'ejecta' almost 30 years ago, said the asteroid impact occurred during a period of extreme cold.

"This contradicts previous ideas which suggest the impact of the asteroid actually precipitated a period of glaciations, Gostin says.

He said evidence of the ancient icebergs is embedded in the fine grained shale found several hundred miles from Lake Acraman...."

Lake Arcaman, South Australia, isn't as well-known as, say, the Caspian Sea or Lake Superior. For that matter, it's not exactly a lake at this point. It's more of an "impact structure" ("The Acraman Impact Structure, South Australia," G. E. Williams, Abstracts for the International Workshop on Meteorite Impact on the Early Earth. Workshop held in Perth, Australia (September 21-22, 1990), via Harvard)

Here's how it looks from orbit (via Google Maps):

The Lemming has mentioned this before: Things don't stay the same for very long. Or, putting it another way, change happens.

Like 500,000,000 or so years back, when an asteroid hit what's now the Gawler Ranges in South Australia.

"...In a commentary to be published in the The Australian Geologist, Professor Malcolm Walter of the University of New South Wales says the research resolves issues around the timing and record of the glaciations, the impact and the rise of the Ediacaran biota.

"He describes the effect of the icy climate and asteroid impact as a 'double whammy' that paradoxically led to the 'flourishing of exotic plankton and the first macroscopic animals'...."

There's a pretty good set of pages on the U. C. Berkeley website about the algae, lichens, giant protozoans, and - things - that lived a half-billion or so years back. It's part of their section on the Vendian period: which leads with the usual stuff about Darwin and those religious people over there. Never mind: they've got some pretty good photos. 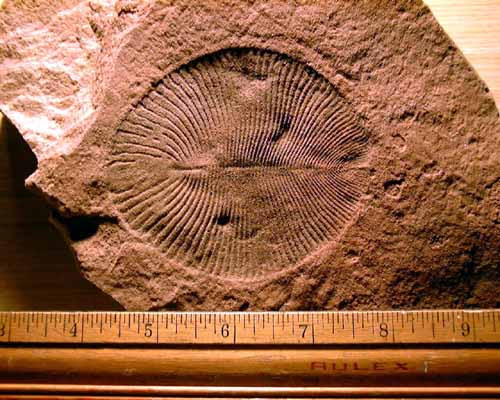 (U. C. Berkeley, used w/o permission)

That photo shows a fossil of Dickinsonia: found in the Ediacara Hills of Australia. It's quite definitely an annelid worm; or a cnidarian polyp; or something else. The Lemming's hat is off to the U. C. Berkeley folks, and others writing now. They've dropped that know-it-all attitude that made their predeceasors' assertions a trifle hard to take seriously, a few generations back. That 'worm - or - polyp' is from the page. The Lemming's opinion is that it's a little early to be really certain: As Berkeley put it, the critter's "often considered to be an annelid worm...." Or maybe a polyp.

Whatever it is, dickinsonia has been compared to an air mattress. (Wikipedia, among others)

As the page featuring tribrachidium says, "its affinities are still mysterious, although distant relationships have been proposed with either the Cnidaria (corals and anemones) or Echinodermata (urchins and seastars)."

Related posts:More, in this blog:More:
Posted by Brian H. Gill at 4:59 PM