"New cosmic observations from the European-built Herschel infrared space observatory have revealed previously hidden details of star form tucked away in distant galaxies. One snapshot reveals what researchers called an 'impossible' star caught in the act of forming.

"The new images show thousands of these galaxies and beautiful star-forming clouds draped across the Milky Way.

"These images were part of the presentation of the first results from Herschel, which was launch on May 14 of last year, today during a major scientific symposium held at the European Space Agency (ESA), which runs the observatory, in Noordwijk, Netherlands. These results challenge old ideas of star birth, and open new roads for future research...."

"In a statement, European scientists said Herschel has discovered an 'impossible' star so massive it would dwarf our own sun, but they are perplexed as to how it came to be. Herschel found the embryonic star in the star-forming cloud RCW 120...." 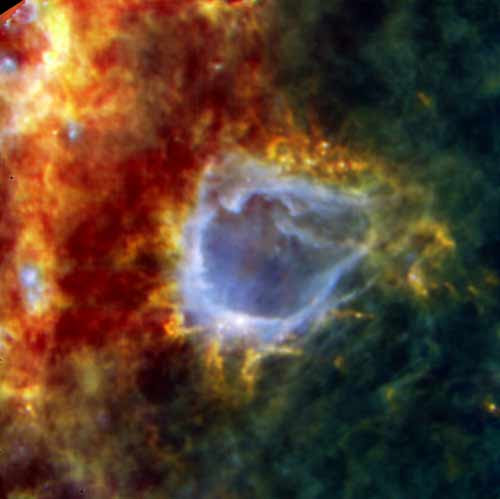 "This galactic bubble is known as RCW 120. It lies about 4300 light-years away and has been formed by a star at its center. The star is not visible at these infrared wavelengths but pushes on the surrounding dust and gas with nothing more than the power of its starlight. Credit: ESA/PACS/SPIRE/HOBYS Consortia"

Another Star is Forming: What's so 'Impossible' About It?

Here's the deal: astronomers, astrophysicists, and cosmologists have come a long way in the last half-century or so. They've got a pretty good set of data, and a quite good set of mathematical models to account for how the stars we see formed and are evolving.

According to those models, no star can start out with more than eight times the mass of our sun.

The star that's forming inside RCW 120 has eight to 10 solar masses: and is still growing.

It's not the first 'too massive' star found. What's special about RCW 120 is that astronomers caught it as it is forming. Massive stars like this don't last long, and are quite rare.

Spotting one so close, this early in its development, is a major find. And yes, 4,300 light years is "close" by cosmic - or even galactic - standards. We're practically on top of the thing.

Somewhere in the next few hundred thousand years, RCW 120 will become one of the biggest, brightest stars in this galaxy. And, if astronomers can keep getting grants for their research - or finding other ways of supporting their work - we'll be able to document the process.

Given how much prep time we've got, astronomers may be able to get observing facilities set up closer to the star. Impossible? Okay: but remember that the Herschel observatory is a robot in Earth orbit. When I was growing up, that was literally 'science fiction.'

'My Mirror is Bigger Than Your Mirror'

When it comes to telescopes, sometimes bigger is better. Particularly is you're trying to collect as much electromagnetic radiation (infrared, visible light, ultraviolet, whatever) as possible.

Sort-of-Related Posts:
Posted by Brian H. Gill at 8:01 AM