DRAMATIC NEWS! FARGO UNIVERSITY FLOODS! READ ALL ABOUT IT!

The Australian's story was dramatic, troubling: and quite inaccurate.

"FARGO: US officials warned yesterday that more of North Dakota's strained levees were likely to fail under the pressure of record flood waters, as approaching snowstorms threatened more misery for worried local residents.

One floodwall protecting a university in the city of Fargo was undermined early on Sunday, local time, swamping the campus in what the mayor called a "wake-up call" to those who thought the worst was over when the river peaked...."

"The reports of my death have been greatly exaggerated"

That's the widely-accepted version of what Mark Twain said. He may actually have said it, at some point. He was a gifted public speaker, as well as a writer, and knew a valuable property when he saw it. The original remark, in a letter, is a bit different. ("Death" MarkTwainQuotes.com - includes a picture of the note S. Clemens wrote)

It's hard to tell, but this is probably the incident The Australian thought is was reporting:

"FARGO, N.D. — The slowly receding Red River briefly breached a dike early Sunday, sending water flowing into buildings at a school campus before it was contained in the enormous effort to save the city, officials said.

"The extent of the damage at Oak Grove Lutheran School wasn't immediately known. The surrounding neighborhood on the city's north side was not evacuated, but residents of some areas were told to plug their sewers and monitor basements.

"Mayor Dennis Walaker said in a Sunday morning briefing that these things 'will continue to happen. I guarantee it.'

"He called the breach a 'wakeup call' and shows the threat that the city faces for the next week...."

That's from yesterday's post. I did a little checking, and found out that NDSU (That's the university in Fargo, North Dakota) classes are out until April 6, 2009 (NDSU Classes And Offices Closed Until Monday, April 6 (GoBison.com (March 29, 2009)). That's "In order to allow NDSU faculty, staff and students to attend to any flood issues they are facing, and to allow other members of the NDSU community to continue to volunteer...." ("NDSU closed until Monday, April 6, 12:01 a.m. NDSU (undated announcement on NDSU website) There's more: "...This is not an evacuation. NDSU remains in a safe area in Fargo...."

Let's see: I see a couple of possible explanations: I pick option #2.

But it Must be True! It's in the News!

I think I see how this error happened. Let's look at the first paragraph of the story, as reported in the upper Midwest. And confirmed by someone who lives in the area.

"FARGO, N.D. — The slowly receding Red River briefly breached a dike early Sunday, sending water flowing into buildings at a school campus before it was contained in the enormous effort to save the city, officials said...." [emphasis mine]

Imagine that you're a reporter and/or editor, looking for something to write about a flood in some bleak, inhospitable, region on the other side of the world. You see that story.

Eureka! You have it: drama, pathos: a campus flooded! Something called "Oak Grove" got flooded. Maybe the reporter was a real pro, and looked up Fargo in a gazetteer. A campus was flooded, and universities have campuses, so you look for universities. Only one's listed: North Dakota State University.

Not even Americans would write "Oak Grove" when they meant "North Dakota State University," you think. So, logically, there must be an unlisted university. With a campus. That got flooded.

So, without further fuss and bother, you write that a "floodwall protecting a university in the city of Fargo was undermined early on Sunday, local time, swamping the campus in what the mayor called a wake-up call'..."

The Australian Got Some Things Right

The Australian should be applauded for getting some details right. Dennis Walaker is Mayor - of Fargo - and that "wakeup call" quote is the same that was reported around here.

'In the News' - 'Accurate' - Not Always the Same Thing

This is why it's such a good idea to check sources - and read the articles one writes about.

If you don't, some middle-aged guy living in the heart of darkest Minnesota may point out your mistake. And try to figure out how you could possibly get the story so scrambled.

Everything I've read - and my memory of Fargo-Moorhead's terrain - indicates that NDSU is fine. No area is really dry in the Red River Valley this time of year, but there's no reason to think that NDSU is flooded.

"The storm comes as the weary city of Fargo remains on high alert against further breaches to its 48 miles (77 kilometers) of protective dikes and levees as the Red River is forecast to remain near record highs for days.

"But strong winds will whip up waves as high as two feet, which will batter and possibly wash over the city's defenses, the national weather service predicted...."

Two foot waves and sandbag dikes are not a comforting combination. On the other hand, dikes in the Fargo-Moorhead area were put up to handle something in the neighborhood of a 42 foot crest. The Red is down to 38.71 feet - still a serious flood - but (I assume) well below the top of the dikes.

Now, as long as those two-foot waves don't wash out some of the dikes, we'll be fine. 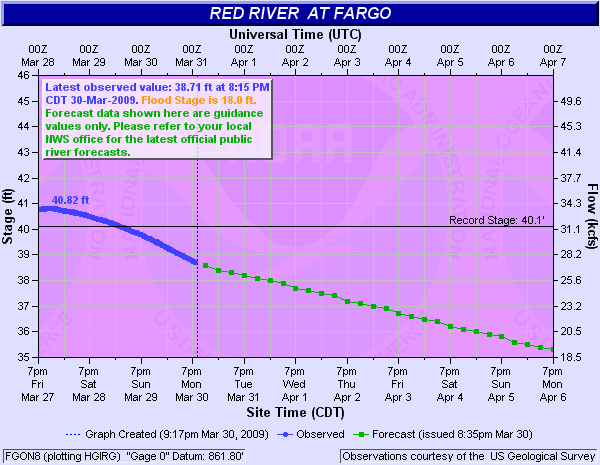 I try to avoid extensive quotes like this, but just in case you live in eastern North Dakota, the North Dakota-South Dakota border, or west central Minnesota, here's what the Weather Service has to say:

"...MAJOR EARLY SPRING SNOW STORM TO AFFECT MOST OF THE REGION INTO WEDNESDAY...

".A SPRING SNOW STORM WILL MOVE FROM THE CENTRAL PLAINS TOWARDS THE GREAT LAKES BY WEDNESDAY ... SIGNIFICANT SNOWFALL ... ALONG WITH GUSTY WINDS ... THE HEAVIEST SNOWFALL IS EXPECTED ALONG THE NORTH AND SOUTH DAKOTA BORDER INTO ADJACENT PORTIONS OF WEST CENTRAL MINNESOTA...."

"...THREAT FOR SIGNIFICANT SNOWFALL. SNOW WILL BECOME MORE WIDESPREAD TONIGHT AND CONTINUE THROUGH TUESDAY. TOTAL SNOW ACCUMULATION FROM 8 TO 14 INCHES WITH LOCALLY HEAVIER AMOUNTS ARE EXPECTED. GUSTY NORTHEAST WINDS OF 20 TO 25 MPH WILL ALSO PRODUCE REDUCED VISIBILITIES IN BLOWING AND DRIFTING SNOW MAINLY LATE TONIGHT INTO TUESDAY. NEAR BLIZZARD CONDITIONS ARE POSSIBLE IN OPEN AREAS...."

There's more detail: follow the link and scroll down (I used my browser's Search function to look for 'Fargo' - no quotes.

"It Could Be Worse"