"A fossil from famous shale deposits in Canada was thought to be unremarkable, but a new study finds that it's actually the remains of a 500-million-year-old monster-looking predator.

"The Burgess Shale (a UNESCO World Heritage Site in the Canadian Rockies of British Columbia) has yielded exceptionally well-preserved fossils that present a remarkable snapshot of Cambrian marine life from 505 million years ago.

"The first fragments of the monster fossil (a species called Hurdia victoria) were described nearly 100 years ago, and at the time, they were thought to be part of a crustacean-like animal, and other parts were subsequently described as multiple organisms including jellyfish, sea cucumbers and other arthropods...."

Calling this critter "miniature" is all in your point of view. It was about a foot and a half long, which is very roughly the size of a cat. Today, not all that big. Half a billion years ago, there weren't too many things around bigger than that. That we know of.


Mistaking Parts for Other Critters - How Stupid is That?

Not very, actually. When creatures die, the parts don't all stay connected. And, when you're looking at a creature that's not much like anything around today, it's nowhere near as easy as "The toe bone's connected to the foot bone...."


Burgess Shale: A Century of Weirdness

Over a half-billion years ago, what's now Canada's Yoho National Park in the Rocky Mountains was under water, near the equator. The Rocky Mountains wouldn't be there for a very long time, but there was a limestone cliff with a nearly-vertical drop of 100 meters (around 300 feet). Fine mud flowed, and fell, off the top of the cliff, washing whatever creatures were in or near it along. The mud and creatures piled up at the base of the cliff.

That mud got buried under more debris, and turned to shale. Continents moved, collided, and moved again. Somewhat later, what had been a shallow sea floor was about two miles above the current sea level.

Around that time, Charles D. Walcott became Secretary of the Smithsonian Institution and found fossils in the shale.

Walcott noticed the ancient animals in 1909. By now, there are about 65,000 in the Smithsonian National Museum of Natural History collection.

The Burgess Shale deposits are particularly valuable because the fine mud preserved very small details in the creatures buried there. And, since what put the mud and the animals there happened very quickly, paleontologists get to study a fairly complete selection of creatures that lived in one place at one time - a sort of ecological snapshot.

And, as the Smithsonian Museum wrote, "The hard parts of all these animals caught in the mudslide were preserved as fossils, like the process at any other Cambrian site. However, here the fine mud also penetrated and filled all available spaces within the animals, thus preserving the shapes and locations of all the soft parts. This is a rare event and has made these fossils extremely valuable to the paleontologist."

That was the good news. The even-better news was that quite a few of the specimens were not just strange: they were downright weird. There were animals that didn't seem related to any creatures alive today. 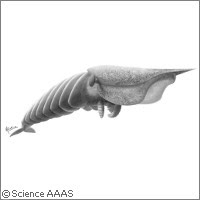 Back to Hurdia victoria, the critter to in that picture to the left. The front part of the animal, on the right, has an over-size, three-part carapace out in front of it's head. What it's there for is anyone's guess at this point.

Which is what makes Hurdia victoria and the other Burgess Shale creatures so fascinating.

There's a lot that we don't know about them. Yet.

Some of the organisms seem to be ancestors of forms of life we are familiar with: algae, chordates (animals with notochord or spinal column - like us) and arthropods (animals with jointed limbs, a segmented body and an exoskeleton made of chitin - like spiders). Others are sort of like forms of life we're familiar with: but don't seem related to anything we've seen before.

There are creatures from familiar phyla:
Okay: some of those aren't that familiar to most people. But, they're kinds of critters that scientists have run into before.

Then, there's "Unknown Phyla" - creatures that existed, but don't have any (known) living counterparts. Some of them aren't like anything that's been found since the Cambrian period.

Like opabinia regalis, there. Five eyes, a long and flexible proboscis with grasping spines at the end, and rows of lobes that probably helped it swim: this isn't quite like anything that's alive today.

Scientists thought their colleague's reconstruction of the creature was a pretty good joke when they first saw it, at a meeting back in 1972. Then, they found out that the presenter was
That five-eyed whatsit is a pretty good example of what we've got in the Burgess Shale: a huge amount of detailed evidence, most of which we still don't understand.

A century after Walcott noticed that first fossil in the Burgess Shale, paleontologists are still putting the puzzle together. Literally, in the case of Hurdia victoria.

There's exciting work still to be done. And, for people like me, the prospect of watching as paleontologists learn more about how life has developed.