Life on Ceres? Could Be 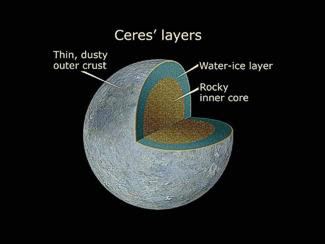 "Astrobiologists hope to find life elsewhere in the universe, or possibly even in our own cosmic neighborhood, the solar system. Their efforts are usually concentrated on worlds such as the planet Mars, or icy moons like Europa. However, there are other, less conventional locations in the solar system where scientists think life may be found...."

The answer to "could life on Earth have come from Ceres" is a definite maybe.

We'll know more, when/if a probe gets close enough to get detailed information. Or, ideally, land.

Ceres, BTW, is a bit of real estate in the Asteroid Belt. It's been called a planet and an asteroid: right now the 'correct' name is dwarf planet. And it just might be one of the more habitable spots in the Solar System. Not for us, but for some sort of life.

Life on Ceres would most likely, conventional wisdom says, be underground, in the layer of water ice we're pretty sure is there. It could be on the surface, though: although if it is, it uses a mix of hydrogen peroxide and water, instead of just water, like we do.

The University of Giessen's Joop Houtkooper has suggested that the 'peculiar chemistry' a Viking lander found was life using a H2O2/H2O mix. Creatures like that would require tiny amounts of water - which they could absorb from the Martian atmosphere. We're talking about really tiny amounts here.

So, he's suggested, when the Viking robot poured concentrated H2O on the Martian life forms, they exploded. "...'If these organisms consist of 50 percent water and 50 percent hydrogen peroxide, then they are sensitive to water, because they blow themselves up when they get too much,' Houtkooper explains. 'This could be what happened in the Viking experiment.'..." (Astrobiology Magazine)

It occurred to me that there might be more than microorganisms on - or in - Ceres. I don't think this is at all likely, but on the other hand it's not flat-out impossible:


There is life on Ceres. Several thousand years ago, people from elsewhere colonized it: and were very pleased to have found a place that was so wonderfully suited to life as they know it.

As a sort of bonus, there was a giant world, much closer to the star, that was intensely hot and had oxygen - a very reactive gas - in its atmosphere. Obviously, although no life could exist there, there was some sort of peculiar chemistry that maintained that freakishly high level of oxygen.

The colonists made a decent living, charging visiting scientists for services while they were in the neighborhood, studying that hot ball of rock.

Then, very recently, the crackpot notion that there was life on that hellishly hot world became a demonstrable fact. Around the same time, robot spaceships from the hellworld started flying around other planets in the stellar system.

Do I think that's likely? Again, no. Possible? Let's say I think it's not impossible.
Other posts, about "Mars, Mostly."