You won't find the McDonnell Douglas Delta Clipper in reports about freight runs to the International Space Station, or anywhere else.

That's because, in 1996, a test vehicle had a bad landing. Sure, there had been many successful flights: but, well, for some reason the McDonnal Douglas Delta Clipper wasn't wanted any more.

The Lemming suspects that the much cooler-looking X-33 Venturestar with its XRS-2200 Linear Aerospike engine, was - well, cooler. Someday, all the effort poured into that cutting-edge, revolutionary, futuristic technology may pay off.

Sure, the X-33 didn't fly, the Delta Clipper had a pretty good flight record when it was scrapped, and some folks just want to get into orbit - whether or not the spaceship looks cool. But, well, there may have been good reason for trying to develop a brand-new propulsion system and working out how to make a practical, fully-reusable, freight carrier to ferry supplies to and from orbit. 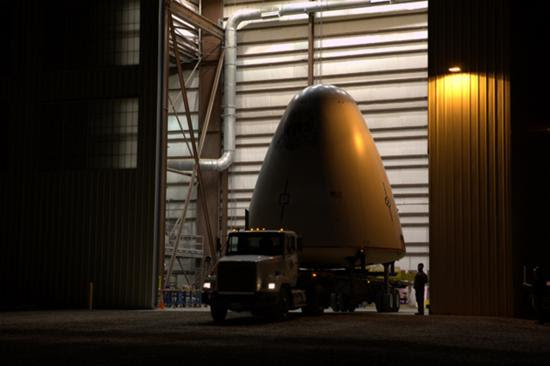 That photo is from 2006 - and stressed how much Blue Origin wanted to hire folks.

Like McDonnell Douglas' Delta Clipper, Blue Origin's Goddard flies. Not all that far, but it does fly - and lands. It looks sort of like a wide-body version of the Delta Clipper: no great surprise, since both vehicles are designed to fly to and from orbit the same way.

Then there's the SpaceX Dragon.

"The Dragon spacecraft is comprised of 3 main elements: the Nosecone, which protects the vessel and the docking adaptor during ascent; the Spacecraft, which houses the crew and/or pressurized cargo as well as the service section containing avionics, the RCS system, parachutes, and other support infrastructure; and the Trunk, which provides for the stowage of unpressurized cargo and will support Dragon’s solar arrays and thermal radiators.

"In December 2008, NASA announced the selection of SpaceX's Falcon 9 launch vehicle and Dragon spacecraft to resupply the International Space Station (ISS) when the Space Shuttle retires. The $1.6 billion contract represents a minimum of 12 flights, with an option to order additional missions for a cumulative total contract value of up to $3.1 billion...."

SpaceX's Dragon is a step in the right direction: a (semi-) reusable vehicle for ferrying cargo and passengers to and from the ISS. Like the old Apollo, Soyuz, and other non-Shuttle vehicles, the Dragon is designed to sit on top of a stack of one-use fuel tanks and rocket motors.

It's a design that works, has been in use for decades, and doesn't require new technology. That's the good news. The bad news is that it still involves throwing away some fairly expensive hardware after each flight. Sort of like an airline that had re-used the fuselage of its airliners, but had to install new wings and engines after each landing.

In the short run, since NASA decided that the Delta Clipper wasn't cool, or whatever the reason was, Dragon and vehicles like it will keep the ISS supplied.

Eventually, though: Blue Origin, or someone else, will almost certainly work the bugs out of vehicles that fly back, land - and can fly again.