"Time is running out! Tutankhamun: The Golden King and the Great Pharaohs ends soon. 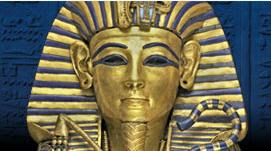 "It took 3,000 years for them to make it to Minnesota, and in only a few short weeks, they'll be going away. Don't miss your rare opportunity to see priceless artifacts that tell the captivating story of royal life in ancient Egypt. King Tut features dozens of stunning artifacts from the tombs of some of ancient Egypt's most powerful and well-known rulers, including beautifully-crafted statues of Khafre, the builder of the Great Sphinx; Hatshepsut, the queen who became a pharaoh; and King Tut's father, Akhenaten.

The exhibition's final galleries are dedicated to King Tut's famous tomb, including an area devoted to its discovery by British explorer Howard Carter in 1922...."

The Lemming saw a King Tut Exhibit in San Francisco, about a third of a century back. The artifacts on display then were - quite remarkable. The mask of Tutankhamen in particular was a great deal more lifelike 'in person,' than in photos. Whether or not the Lemming will see this exhibition - is a good question.

The Tut exhibit is traveling - so the Lemming put a link to Tutankamon at the end of this post. And in the preceding sentence.

Extra letter: "link to Tutankamon at then end of this post."

Oops. Fixed it: Thanks!

Hey - this exhibit is around through the end of August. I might be able to see it, after all. Interested?