'Cancer Causes Cell Phones!' - or, not

Remember when just about everything caused cancer - and the rest was either fattening, caused heart attacks, or drowned you? The Lemming does. 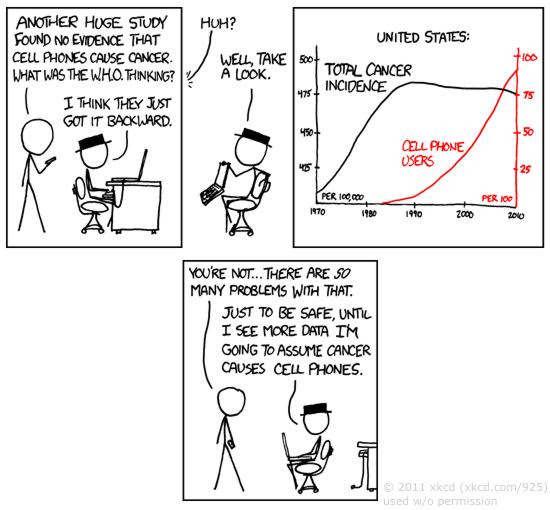 (from xkcd, used w/o permission)

If the conclusion wasn't so obviously wackadoo, the Lemming suspects that someone might have a shot at getting research money to 'prove' that cancer causes cell phones.

The Lemming's explained about this not-exactly-apathetic blog before. It's not that the Lemming doesn't care; the Lemming's 'apathetic' about the latest AND WE'RE ALL GONNA DIE!!! scare. Whatever it is. There have been too many, over the decades - and there's a discernible pattern.

Many doomsayers seem to be upset because things aren't just the way they remember them being, back in the 'good old days' of their youth. Over the last half-century, the destroyers of society have included:
And, of course, cell phones. Information technology seems to be really scary - and that's another topic.

So, does the Lemming think that cell phones are absolutely, positively safe? No.

Does the Lemming think that cell phones cause CANCER?!!! No.

The Lemming thinks that the usual 'it's new, and it scares me' thing is happening again. The Lemming has used cell phones, and will continue to do so. But the Lemming won't use duct tape to keep a cell phone to his year 24 hours a day, or try to swallow one. That probably wouldn't be a good idea.

But, if cell phones cause cancer - and not the other way around - the connection seems tenuous, at best.

Something Doesn't Cause Cancer? (Maybe It's a Conspiracy!)

"Back in May, a group of experts from the International Agency for Research on Cancer (IARC) made waves when they warned that mobile phones may indeed raise the risk for some brain tumors.

"As I wrote in TIME:


"To the surprise of many cancer experts, IARC classified cell-phone-radiation exposure as "possibly carcinogenic to humans." The panel put cell phones in category 2B on the agency's willfully unhelpful scale, below sure carcinogens like cigarette smoke and in the same category as the pesticide DDT and gasoline-engine exhaust. "A review of the human evidence of epidemiological studies shows an increased risk of glioma and malignant types of brain cancer in association with wireless-phone use," Dr. Jonathan Samet, the chairman of the IARC working group, told reporters the day the study was released...."

"I warned readers then that the IARC's conclusion was tentative at best, and that the argument over the potential dangers of cell phones was far from over. And here drops the other shoe — or study....

"...In a new paper in the American Journal of Epidemiology researchers looked at data from more than 2.8 million Danish adults, and found that those who had used a cell phone for 11 to 15 years were no more likely than new users or non-users to develop acoustic neuromas — a kind of brain tumor that develops near the ear, where cell phones would be used.


"Among the nearly three million Danish adults they had data for, just over 800 were diagnosed with acoustic neuroma between 1998 and 2006. And those who'd used cell phones the longest - at least 11 years - had no greater risk than shorter-term users or non-users.

"On top of that, [study author Joachim] Schuz said in an email, there was no indication that long-term cell users had larger-than-expected tumors. Nor did they have a tendency to develop acoustic neuromas on the right side, where most held their phone.

"(By the way, Schuz works for the IARC, the same World Health Organization's body that issued the earlier warning against cell phones.)...

"...Schuz's study echoes a recent review in the journal Environmental Health Perspectives, which looked at the results of the controversial Interphone study on cell phones and cancer — which I wrote about last year — and concluded that it was unlikely that mobile phone radiation would cause an increase in tumors.


"While one cannot be certain, the trend in the accumulating evidence is increasingly against the hypothesis that mobile phone use causes brain tumors."

"The key words here: "one cannot be certain." Critics of the review noted that the authors received funding from the mobile phone industry...."

So, we're supposed to add "Big Telephone" to the list of big-bads to be suspicious of? Still: it's a point. Folks might tend to see what they want to see in a nondescript pile of data. Even folks who write scary reports for WHO.

So, what's the harm in publishing one more half-baked 'scientific' warning that telephones lead to divorce, or cell phones cause cancer, or wearing plaid leads to sword dancing?

Are you aware of the cell phones cancer? If not then read our blog post to know the complete details regarding the preventive measures you can take to stay protected.