NASA, Extraterrestrial Life: and Titan is a Moon of Saturn, not Mars

Update (December 2, 2010)
More on the NASA announcement:Another reason why the Lemming takes what's in the news with a few truckloads of salt:

"A NASA press release announcing "an astrobiology finding" -- something that will impact the search for extraterrestrial life -- has sent shockwaves through the blogosphere.

The press release simply announces an event, set for Thursday at 2 p.m. EST, to discuss an astrobiology discovery 'that will impact the search for evidence of extraterrestrial life.' Astrobiology is the study of the origin, evolution, distribution and future of life in the universe.

And the concept of NASA discussing alien life has everyone a-Twitter. Gawker, PC World, New Scientist and others have all speculated about the news -- even suggesting that the space agency may reveal that E.T. has finally arrived.

The reality may be less dramatic, though still intriguing: Based on the background of the four conference participants NASA cites, the announcement will probably concern lifeforms that live off of poisonous arsenic. Popular blogger Jason Kottke and others have concluded that the announcement will tie into the quest for life on the Martian moon Titan.

'I'd say that they've discovered arsenic on Titan and maybe even detected chemical evidence of bacteria utilizing it for photosynthesis,' Kottke theorizes, a hypothesis short of actually confirming alien life...."

Again, a link to the Kottke post:Mr. Kottke, by the way, identifies Titan - correctly - as a moon of SATURN, not Mars.

Yes: Mars has moons. Two of them. Really tiny moons. They're called Phobos and Demos.

Mars is not Saturn. Saturn is an entirely different planet. Titan orbits Saturn.

FOXNews sometimes identifies an article's writer: not this time. Just as well, maybe. This isn't the sort of gaffe a reporter - or editor - would want 'on the record.'

It's a little like a sports writer referring to the Super Bowl as a basketball game, or someone covering international news writing, "in Hong Kong, the capital of Germany...."

The Lemming speculates that the 'Titan is a moon of Saturn' reporter may have been lead astray by the Gawker article. 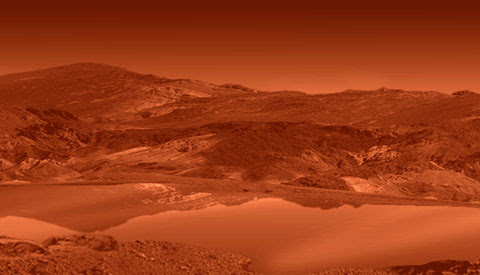 Gawker displays an artist's impression of a lake on Titan: and identifies it as such, at the end of their article. So I suppose a reporter could have seen the picture, noticed that it was red, associated red -> red planet -> The Angry Red Planet -> Mars: and did not noticed the "Did NASA Discover Life on One of Saturn's Moons?" headline right above the picture.

And I'm guessing the gaff is elsewhere in the article, as I can't find it in the section you quoted.

Got it: fixed it. Thanks!

The gaffe is at the end of the second-to-the-last paragraph in the excerpt:

"...Popular blogger Jason Kottke and others have concluded that the announcement will tie into the quest for life on the Martian moon Titan...."

I could make a crack about "Martian" being easier to spell than "Saturnian," but that'd be mean.