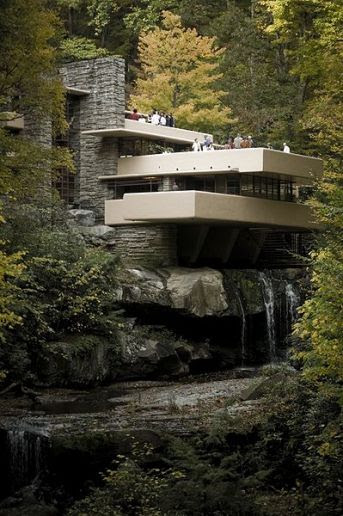 "Anyone with a pile of money can build a big pile of a house, and back in the day, that's what you did. (See, for instance, Downton Abbey.) But during the 20th century, a group of architects staged a controversial revolt. Why, they asked, couldn't less be as impressive as more? Across North America, sensational - but often reasonably-sized and usually deceptively simple - homes stand as their legacy. Here are ten of the best. All of them are open to the public, but make advance reservations...."

The article lists each of these houses:
Each entry comes with a one-paragraph description: and a link to 'low air fares' to the area, in case you want to plan a trip.

The house in the photo up there is Frank Lloyd Wright's Fallingwater. Two things that folks with the budget for a 'landmark' house like that might want to remember is that the architect is likely to be remembered longer than the original owner; and that bold, imaginative, innovative, houses can have serious maintenance issues. 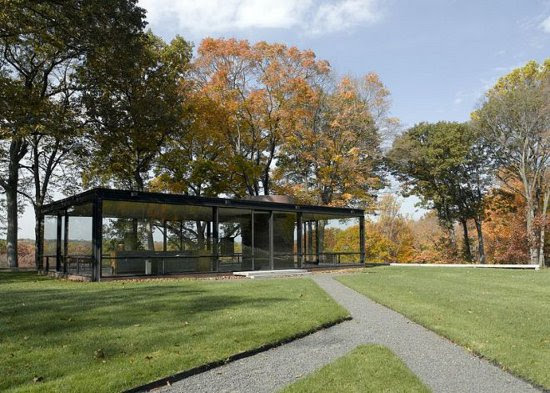 (Phillip Johnson Glass House, via FoxNews.com, used w/o permission)
"You'd expect a man like Phillip Johnson, one-time associate of Mies van der Rohe and later an architectural legend in his own right, to live in a pretty amazing house. And he did, in a section of Connecticut's...."

Then there's the Phillip Johnson Glass House, where the original owner's name is associated with it. Possibly because Mr. Johnson stood out in 1940s America as someone who literally lived in a glass house. Or owned one, anyway.

The article's got eight more photos, one for each of the houses. It's a pretty good 'tour' for someone like the Lemming, who doesn't get out much. Not for transcontinental sightseeing jaunts, anyway.