"The biggest full moon of the year, a so-called "supermoon," rose into the night sky Saturday to the delight of skywatchers around the world, who captured the lunar sight in dazzling amateur astronomy photos.

"Because of a fluke of orbital timing, the full moon of May peaked late Saturday just as the moon was passing its perigee, the closest point to Earth of its orbit. The result was the biggest full moon of the year, which NASA and other scientists nicknamed the supermoon of 2012.

"In Amman, Jordan, the bright moon amazed skywatcher Carra Almond of Canton, N.C., who is currently living in Jordan with her husband. Almond said the moon was a captivating sight from her apartment balcony. Her photo shows a crystal clear moon shining bright against a black night sky. [Supermoon 2012 Photos from Around the World]..." 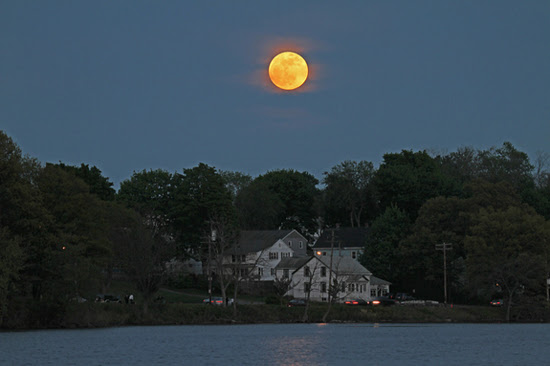 The Lemming missed the 'supermoon.' Here in central Minnesota, the sky was overcast yesterday. Occasionally the clouds wrung themselves out, and there's a rumor that blue sky was visible around mid-afternoon. Which would have been a really bad time for trying to see that whacking great moon.

Not that the moon really was bigger: Like the SPACE.com article said, it looked bigger because the moon was at its closest approach to Earth in its orbit, right about when it was full.

One of the "Supermoon 2012 Photos from Around the World" caught the Lemming's eye: 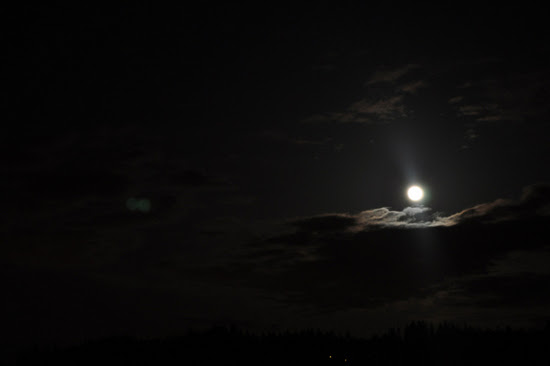 (Tonya Traylor, via SPACE.com, used w/o permission)
"The supermoon of 2012 shines bright in a cloud-spattered sky in this view from skywatcher Tonya Traylor from Manchester, Wash., on May 5, 2012. "

That was a happy coincidence of moon, cloud, camera: and someone ready to capture an image.

One more thing: the "around the world" pictures include an infographic that shows just how much bigger than normal the moon looked. Or would have looked, if the Lemming's home hadn't been under a soggy blanket. Oh, well: at least the tornado missed us. And that's another topic.