Multimedia at the Symphony, and Skateboarding Meets Opera

"The Eiffel Tower. The Colosseum. The Taj Majal. The Pyramids.

"Massive architectural marvels from times past, they are often stopping points on a tourist's journey. 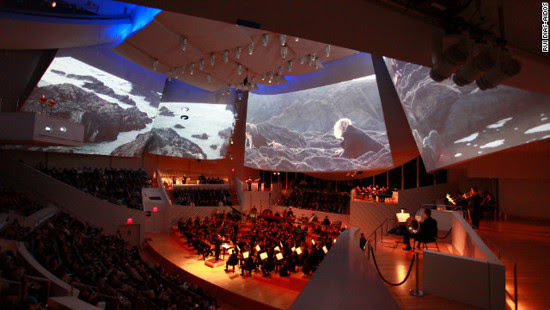 (turner.com/CNN, used w/o permission)
"The New World Symphony performs the premiere of 'Polaris' in January at the symphony's New World Center home in Miami Beach, Florida."

"Although these grand sites aren't always why globe-trotters say they're going on vacation, some of history's great works of architecture star in the returning traveler's photos. Did you get that smiling shot in front of Buckingham Palace or the photo 'pushing' the Leaning Tower of Pisa upright?

"Despite a tight economy, a new generation of architects is giving the traveler reasons to jump on a plane to see modern masterpieces. Many of the new structures are public projects, designed to welcome the resident and tourist alike...."

There's an echo or two of the 'let's make buildings look like packing crates' era, but what impressed the Lemming about this set of structures is that they don't all look alike.

Just a suggestion, but check out the picture captioned "People take in the warm weather at the High Line, Manhattan's newest park constructed on a former elevated railroad track." The photographer and editors get points for keeping the camera at eye level - giving readers a look at the place as seen by folks actually using it. 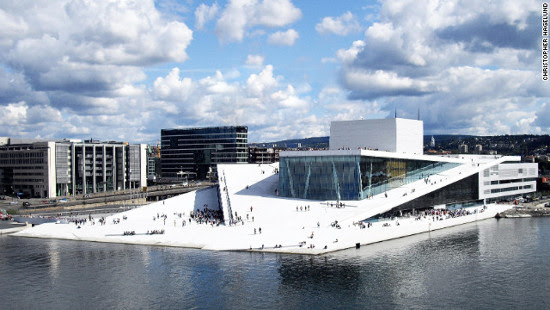 (turner.com/CNN, used w/o permission)
"Part of a development project to connect the waterfront to the rest of the Norwegian city, the Oslo Opera House's design encourages visitors to walk up the building to a public space on the roof."

About the Oslo Opera House roof/ramp:

"...For the architecture geek: If you think the outside of the Oslo Opera House would be an excellent skate park, it's no accident. Skateboarders were consulted about the exterior design and surfaces and have enjoyed the results, according to Wired magazine..."
(Katia Hetter/CNN)

That's an impressive-looking structure. From a distance. It's not likely that the Lemming would ever be in a position to test this: but dark glasses might help cut the glare from that vast white surface. Or maybe it isn't quite as dazzling-bright as it looks in this photo.

Still - that's an impressive-looking structure. And the Lemming's repeating himself.