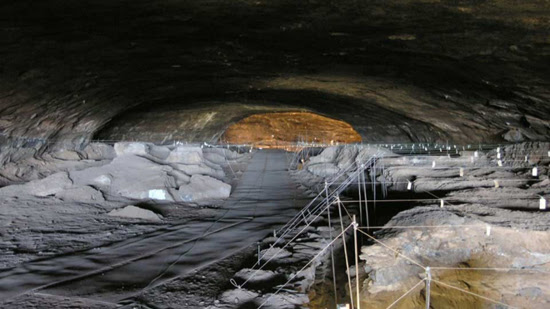 (M. Chazan, via LiveScience and FoxNews.com, used w/o permission)
"Researchers found evidence of human fire use in South Africa's Wonderwerk Cave (shown here), a massive cavern located near the edge of the Kalahari Desert. (M. Chazan)"

"Ash and charred bone, the earliest known evidence of controlled use of fire, reveal that human ancestors may have used fire a million years ago, a discovery that researchers say will shed light on this major turning point in human evolution.

"Scientists analyzed material from Wonderwerk Cave in South Africa, a massive cavern located near the edge of the Kalahari Desert. Previous excavations there had uncovered an extensive record of human occupation.

"Microscopic analysis revealed clear evidence of burning, such as plant ash and charred bone fragments. These materials were apparently burned in the cave, as opposed to being carried in there by wind or water, and were found alongside stone tools in a layer dating back about 1 million years. Surface fracturing of ironstone, the kind expected from fires, was also seen...."

This discovery is a big deal. Along with string, fire is one of those basic technologies people use. And now it looks like people have been using it for about 1,000,000 years. At least.

Not that the fires in Wonderwerk Cave were the sort of thing you'd find in a Bessemer converter.

"...Although modern humans are the only human species alive today, originating about 200,000 years ago, other human species once roamed the Earth, such as Homo erectus, which arose about 1.9 million years ago. [10 Things That Make Humans Special]

" 'The analysis pushes the timing for the human use of fire back by 300,000 years, suggesting that human ancestors as early as Homo erectus may have begun using fire as part of their way of life,' said researcher Michael Chazan, a paleolithic archaeologist at the University of Toronto and director of the university's archaeology center.

"The research team's analysis suggests that materials in the cave were not heated above about 1,300 degrees Fahrenheit (700 degrees Celsius)...."

Granted, even with a shave, haircut, and new clothes, someone from 1,900,000 years back would have had trouble blending into a crowd today. But folks seem to have been using kitchens for upwards of 800,000 years: and what scientists found in Wonderwerk Cave says that cooking fires go back 200,000 years before that.

I'm not terribly surprised at this latest finding. Over the last century or so, folks have been learning that the universe is bigger, and older, with fascinating structures at increasingly large and small scales.

I've been fascinated by the unfolding story: and by what we've been learning about my remote ancestors. Not everybody has the 'oh wow' response I have, and I'll get back to that.


Gathering 'Round the Campfire

"...Fire would have helped early humans stay warm and keep nighttime predators at bay, and enabled cooking, which would have made food more digestible. In addition, 'socializing around a campfire might actually be an essential aspect of what makes us human,' Chazan said. 'The control of fire would have been a major turning point in human evolution.'

"Harvard anthropologist Richard Wrangham has speculated that controlled fires and cooked meat even influenced human brain evolution. He suggests that humans were cooking their prey as far back as the first appearance of Homo erectus 1.9 million years ago, just when humans were experiencing major brain expansion, and proposes that cooking allowed our ancestors to evolve larger, more calorie-hungry brains and bodies, and smaller guts suited for more easily digested cooked food.

" 'It's possible we may find evidence of fire use as early as Wrangham has suggested,' Chazan told LiveScience...."

Human beings are, from one point of view, opportunistic omnivores. We can get by without meat. But for the last 2,500,000 years, it's been part of the diet for most of us. Richard Wrangham says we've been cooking our meat for the last 1,600,000 years - which wouldn't surprise me a bit.

Besides tasting better, cooked meat is easier to digest - which meant that our distant ancestors needed smaller digestive systems when the said goodby to steak tartare. For the most part. 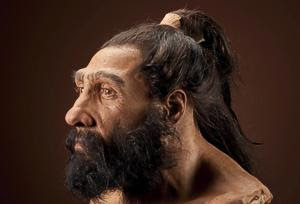 Good thing, too, since a given unit of our brain burns energy about 22 times as much as the same unit of muscle. (Aiello, 1997) Not that someone decided, about 1,600,000 years back, 'we'd better start growing bigger brains - so those big guts have got to go.' The last I heard, scientists hadn't nailed down just how and why critters change over time.

Still, switching from munching berries and fruit to a diet that included cooked meat gave our bodies room to grow these outsize brains we have. And occasionally use.

I've played with the idea that dangerous new technologies like fire and flint knapping may have put 'evolutionary pressure' on folks whose neighbors were early adapters. I'm not very serious about the notion - but it takes a little extra intellectual work to:
Then there's the tricky matter of cooking meat without burning your fingers. Sure, it's simple for us: but we're folks whose ancestors have been dealing with fire for about a million years.

These days, some folks who eat cooked food without a qualm seem convinced that today's 'dangerous new technologies' will kill us all. That reminds me of the cartoon where one caveman was grumbling to another about what that crazy kid was doing: "Just wait, someday it'll get out of control, and destroy the entire village."

He was right: but I think there's a reason why most of us cook food, and steak tartare is a specialty food.