"If the number of phone calls to police is any indication, it was a relatively quiet night in the eastern Wisconsin community of Clintonville where mysterious booms have awakened residents for several nights.

"The strange disturbance sounds like distant thunder, fireworks or someone slamming a heavy door. Officials have checked water, sewer and gas lines, contacted the military about any exercises in the area, reviewed permits for mining explosives, in addition to testing methane levels at the local landfill.

"The city is also investigating geological causes. Officials plan to bring in vibration detection devices to try to determine the epicenter of any underground activity. Authorities set up audio and video equipment overnight but didn't capture any evidence of shaking or booming despite at least one loud noise about 5 a.m. Wednesday...."

The odds are, in the Lemming's opinion, that Clintonville, Wisconsin, isn't in any particular danger at the moment. The booms and rattling could be caused by mining or heavy truck traffic. If either was in the area. Which they're not.


'Nothing to Worry About,' and the Kryptonian Science Council

"...However, a local scientist said nothing has surfaced that suggests townspeople should be afraid...."

Didn't the Kryptonian Science Council say something like that, shortly before the planet blew up? Well, that was a comic book story. Clintonville, Wisconsin, is a real place.

Something like this happened in the small Minnesota town where the Lemming lives. Except that was one really big 'BOOM!' And we found out what happened pretty quick. Someone had decided to get rid of a big pile of stuff, by burning it. And discovered what happens when fuel vapors accumulate before you set the fire. Nobody was hurt, happily.

"...Steve Dutch, a geologist at the University of Wisconsin-Green Bay, said the ground beneath them is solid, and that there are no known earthquake fault lines in the area.

"Dutch said he heard some people worrying that a sinkhole might open up and swallow homes. That can happen in areas where the ground is rich with limestone and other rocks that can be dissolved by water, he said. But the rock below Clintonville is mainly solid granite that's largely impermeable.

"He speculated that water and granite could hold the key to the mystery. Granite has small cracks that water can fill, but if the underground water table falls especially low, water can seep out, leaving gaps that cause the rocks to settle and generate loud noises...."

There are several things going on here.

What Dutch said about sinkholes lines up with what the Lemming's read about those real estate surprises. Granite simply isn't the sort of rock that's at all likely to develop big holes like that.

The Lemming doesn't doubt that there aren't any known fault lines under Clintonville, Wisconsin. But folks didn't know about the New Madrid fault, until it unclenched, back in the 19th century. Still, it doesn't seem all that likely that there's a previously-unmapped fault under Clintonville.

Looks like the Lemming isn't the only one with an imagination.

"...Some residents are having fun with the mystery, which has drawn media attention from around the nation.

"Jordan Pfeiler said people stayed up late on the first two nights to walk around listening for booms. They came up with outlandish theories to explain the noise - for example, that the White House was building an underground bunker in the area or that mole men had found a home there. 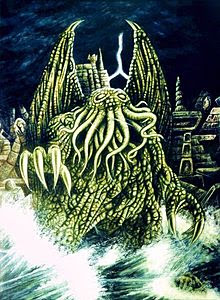 Mole men are a good start. So are aliens. But let's not be satisfied with half-measures here. Eldritch subterranean thunder? No readily-apparent explanation? Cracks in the basement walls? If this were a particular sort of story, we'd be within a few chapters of the big guy himself showing up: Cthulhu.

No, the Lemming doesn't really think so. Cthulhu and company are fiction. That sort of thing does make a good story, though. In the Lemming's opinion.