The Lemming learned about NHK World from still photos/screenshots from its video feed.

The news channel has a streaming feed, through USTREAM, the service the Lemming uses for Small Town America: Minnesota.

The news channel's content is in Japanese, with a running translation voice over in English. It's a pretty good resource, in the Lemming's opinion, for giving a look at Japan's experience from a Japanese perspective. 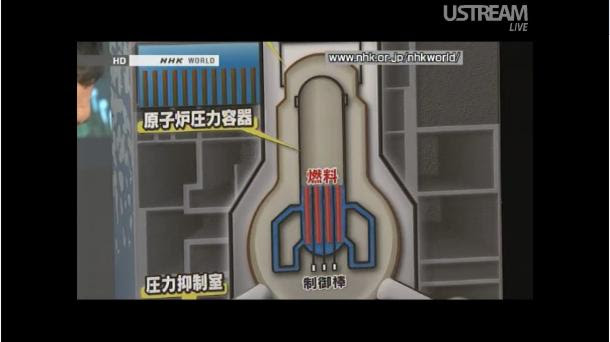 (NHK WORLD TV, via Official NHK WORLD TV live on USTREAM, used w/o permission)
Screenshot of NHK WORLD TV streaming feed on USTREAM, taken about 1:35 p.m. Central, March 16, 2011. The diagram is on the side of a model of one of the Fukushima power plant reactor buildings.