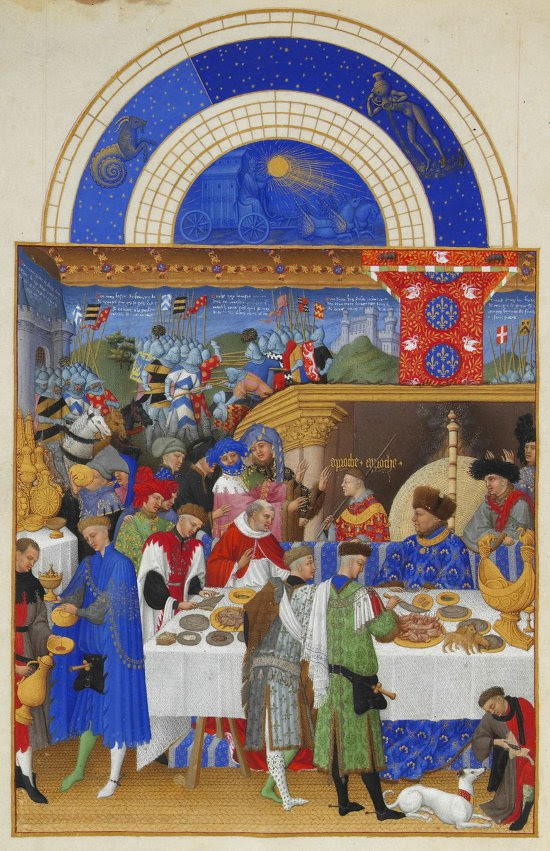 January is named after Janus, a two-faced ancient Roman god who, oddly enough, had nothing to do with politics or infomercials. The idea, as the Lemming recalls, was that Janus did doorways and January was a doorway into the new year, except it's not a real door.

These days January has 31 days each year, except leap years when it has - oh, right. That's February. Never mind.

Anyway, ancient Romans had ten months each year: which is why October, November, and December have the names they do. Romans were farmers, basically, so there wasn't much point in having months during winter. What's the point? You can't plant, weed, or harvest anything: so why waste a month on do-nothing time?

That was then, this is now, and Americans have Daylight Savings Time: which is at least as weird as a monthless winter. Annoying, too, and that's another topic.

That picture comes from a calendar made for the Duc du Berry: who didn't have much to do with berry-picking, except maybe on some of his estates. He's the dude with a fancy blue shirt and squarish brown hat. Folks in the foreground are exchanging New Year gifts.

From the looks of what's going on just outside, Duc du Berry's New Year's bash is getting a bit out of hand.

What really impressed the Lemming about this picture is that the hills are green. Green. In January?! Either someone didn't tell the artists that France is in Earth's northern hemisphere: or 15th century winters in Europe weren't like winters where the Lemming lives: which is entirely possible.

Ireland in January is pretty green, but then again, that's *Ireland.*

And I think the guys fighting outside are there for the entertainment of the guests. Probably a tournament of some sort.