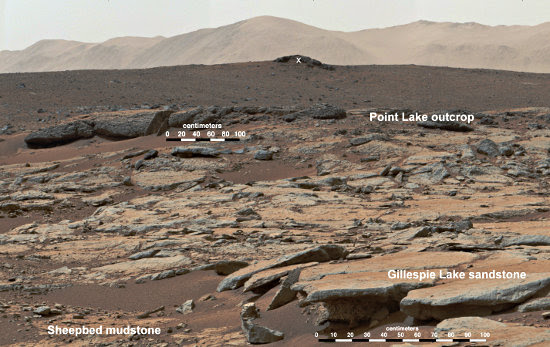 (From NASA/JPL-Caltech/MSSS, used w/o permission.)

"This mosaic of images from the Mast Camera (Mastcam) instrument on NASA's Curiosity Mars rover shows a series of sedimentary deposits in the Glenelg area of Gale Crater, from a perspective in Yellowknife Bay looking toward west-northwest.

"Curiosity's science team has estimated that the 'Cumberland' rock that the rover drilled for a sample of the Sheepbed mudstone deposit (at lower left in this scene) has been exposed at the surface for only about 80 million years. The estimate is based on amounts of certain gases that accumulate in a rock when it is close enough to the surface to be bombarded by cosmic rays. An explanation for that unexpectedly young exposure age comes from improved understanding of how the layers are eroding to expose underlying layers. The explanation proposes that the mudstone is being exposed by abrasion by windblown sand, indicated by arrows. The role for wind is strongly suggested by the undercutting of the Sheepbed layer below the Gillespie Lake sandstone...."

Calling something that's about 80,000,000 years old "young" may seem odd. Compared to the 4,500,000,000 or so times that Earth went around our sun since the Solar system's inner planets settled down, though: it's very new indeed.

Quite a bit happened since the Sheepbed mudstone started soaking up cosmic rays. Something reset Earth's ecosystem, giving furry little critters a chance to assert themselves; and now Earth is either in the warm cycle of an ice age, or at the end of one.

Either way, the Lemming thinks the next 80,000,000 years should be interesting too..