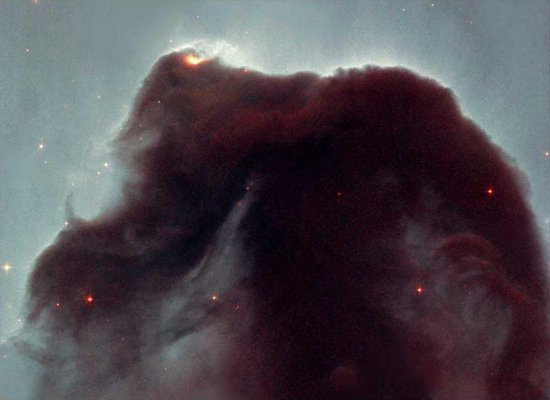 "Rising from a sea of dust and gas like a giant seahorse, the Horsehead nebula is one of the most photographed objects in the sky. NASA's Hubble Space Telescope took a close-up look at this heavenly icon, revealing the cloud's intricate structure...."

Like the fellow said, "Hier ist wahrhaftig ein Loch im Himmel." If Sir William Herschel had been using English at the time, he'd have said "here is truly a hole in the sky." The Lemming found that comment on BBC's website. And no: Sir William Herschel's comment was not made in a blog. The Internet wasn't around in the 18th century, and that's another topic.

The same BBC page says that some folks call the Horsehead Nebula Barnard 33, and that someone took a photo of it at an observatory in Cambridge. Not the one in England: the one in Massachusetts.

If the Lemming wore a hat, it'd be tipped to Harvard for giving credit where credit is due. 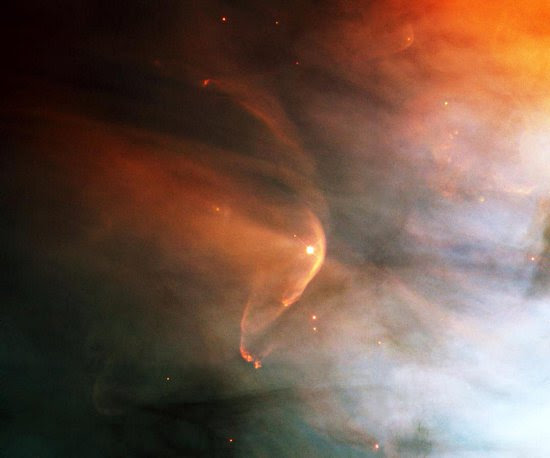 "Astronomers using NASA's Hubble Space Telescope have found a bow shock around a very young star in the nearby Orion nebula, an intense star-forming region of gas and dust.

"Named for the crescent-shaped wave a ship makes as it moves through water, a bow shock can form in space when two gas streams collide. In this case, the young star, LL Ori, emits a vigorous wind, a stream of charged particles moving rapidly outward from the star. Our own Sun has a less energetic version of this wind that is responsible for auroral displays on the Earth.

"The material spewed from LL Ori collides with slow-moving gas evaporating away from the center of the Orion nebula, located to the lower right of the image. The surface where the two winds collide is seen as the crescent-shaped bow shock...."

If it seems that a lot of photos taken through telescopes show stuff in the Orion Nebula, you're quite correct. That's because Earth's star is so close to this complex mess of hot and cold running gasses, stars in various stages of formation, and spectacular light shows.

'Close' is a relative term, of course. Light captured in those photos started its journey to Earth more than a dozen centuries back. Most humans probably think of that as a large distance.

By the way, if you're interested in watching the Orion Nebula: don't dawdle. Its supply of gas and dust will run out in about 100,000 years. Oh, wait. That's probably a long time in your frame of reference.