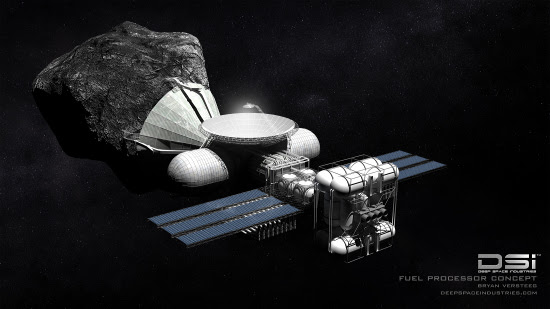 "A new asteroid-mining company will unveil itself to the world on Tuesday (Jan. 22) and is expected to present an ambitious plan to exploit the resources of deep space.

"The new private spaceflight company, called Deep Space Industries, Inc., will reveal its plans at 1 p.m. EST (1800 GMT) Tuesday at the Santa Monica Museum of Flying in California. The new company is the second audacious project aimed at tapping the myriad riches that asteroids harbor.

"Deep Space seeks to launch 'the world's first fleet of commercial asteroid-prospecting spacecraft,' according to a press advisory the company sent to reporters. 'Deep Space is pursuing an aggressive schedule and plans on prospecting, harvesting and processing asteroids for use in space and to benefit Earth.'..."

Well! It's about time!

Humans have been putzing around, picking up a few rocks here and there, scraping some sand there, and taking pictures just about everywhere in the Solar system. That's fine: the Lemming has nothing against tourism or science.

On the other hand, the fourth planet's surface is covered by iron oxide - maybe the biggest deposit of iron ore humans are likely to find in the next few centuries. Unless someone works out practical applications of Alcubierre's equations sooner, and that's almost another topic. (November 30, 2012)

Where was the Lemming? Humans, tourism, science. right.

Sending postcards from Mars, learning how rocks on Mars aren't quite like rocks on Earth, and counting Saturn's rings, is all well and good: but humans use metals like iron and nickel. There's a remarkable amount of iron ore near Earth's surface, and a fair amount of nickel, too.

Until very recently, though, the only useful iron humans had was what fell from the sky. Meteroric iron is very useful, but very rare. Eventually, humans figured out how to get iron out of that reddish soil that's so common in some spots. That was about two dozen centuries back, more or less.

About two dozen years back, humans made a few trips to the Moon, brought back some rocks, and haven't been back since.

That's where outfits like Deep Space Industries come in.

For example, Tsiolkovsky published some interesting math that showed how folks could travel to other planets. At the time, it was interesting but impractical. The math was okay, but ridiculous amounts of energy were needed. Other humans worked out the technology for making interplanetary spaceships.

Which brings us back to asteroid mining.

Mining in the asteroid belt has been staple fare in science fiction/speculative fiction/whatever for decades. Larry Niven's Belters probably have more in common with gold rush miners than tomorrow's technicians and robots. So far, the Lemming's only noticed two companies gearing up for off-Earth mining:
As word of real asteroid miners spreads, the Lemming figures that some folks will be upset. No surprises there. Some humans are good at dealing with new ideas. Others, not so much. And that's yet another topic. (A Catholic Citizen in America (January 25, 2013))

A bit more seriously, most national and international law got written when humans didn't do much apart from take photos and collect souvenirs on trips away from Earth. Mining operations are a whole different proposition. The Lemming figures that judicial wrangles will keep lawyers busy for years. Decades.

More:
Related posts:
Yet more posts, the Lemming's view of: