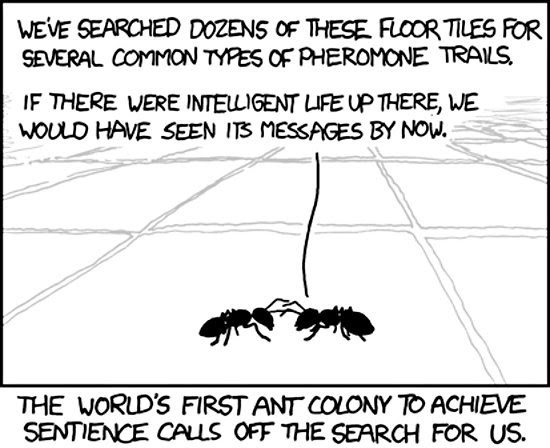 (from XKCD, used w/o permission)

SETI, the Search for Extra-Terrestrial Intelligence, almost always assumes that space aliens will use radio for communications.

It makes sense, sort of. People on Earth use radio for most long distance communications. Now.

Let's take a step back and look at people on Earth, technology, and time:
Granted, people who used fire 1,000,000 years ago didn't look quite like the British Royal family: but folks who use tools and fire are, arguably, people. Even if they're obviously not British.

People have been using radio for a very long time, by American standards. Looking at the big picture, though? We've used radio for 151/1,000,000 the length of time we've been using fire.

Maybe there simply isn't anything about the universe that the Harvard–Smithsonian Center for Astrophysics, CERN, and IISc, don't already know.

Then again, maybe not.